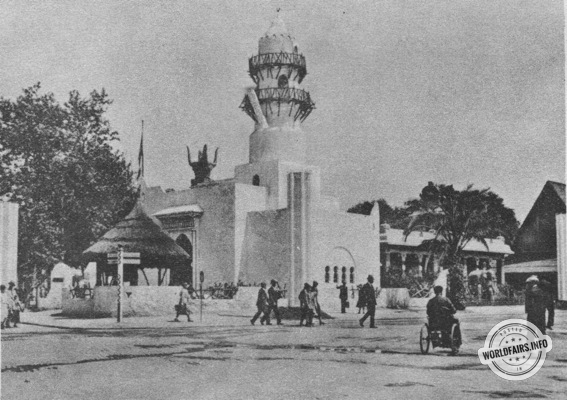 To travellers embarking for the first time on the liners of the Messageries Maritimes, the old regulars of the Far East line never fail, as soon as one has entered the Red Sea, to tell the story of the Djibouti palm tree.

This palm tree had been planted by a governor who wanted to give himself the illusion of greenery in a country more bare than an operating table. And care had been taken to protect it from the vagaries of the climate: it was a zinc palm tree. The anecdote is pleasant, harmless and of course false. The fact remains that the Côte des Somalis could hardly be considered an oasis. The interest of our little Red Sea colony is above all political, strategic and commercial; this is what the administration of this French land was willing to point out in Vincennes.

It is understandable that the task of Mr. Gleitz, former director at the Ministry of Colonies, Commissioner of the Somali Coast at the Exhibition, was not an easy one; let us hasten to add that he carried it out with skill and taste.

The Pavilion of the French Somali Coast at the Colonial Exhibition, designed and built by M. Wulffleff, Architect, is the exact reproduction on a reduced scale of the largest Mosque in Djibouti: the Hamoudi Mosque.

It is divided into three rooms:
1° An exhibition room with a central patio and a gushing water basin;
2° a bar for tasting Harrari coffee run by the colony's indigenous people: Somalis and Danakils;
3° the Commissioner's office, where all information of interest to visitors is provided.

As soon as you enter, you are struck by the predominant place reserved for indigenous art, represented by more than three hundred different objects.

These objects, which are the property of the Colony, were gathered after meticulous research by Miss E. Soulier, Government Archivist, correspondent of the Colony at the Exhibition.

The panels on either side of the entrance door are occupied by the Compagnie du Chemin de fer Franco-Ethiopien. A map and a longitudinal profile of the line can be seen, which highlight the difficulties that had to be overcome in order to complete its construction. The Franco-Ethiopian Railway is 783 kilometres long and rises gradually from 0 to 2,400 metres.

Participation of Mr. Régnault-Sarasin. - Mr. Regnault-Sarasin brought back many watercolours from his travels around the world. The ones that are of interest to the Colony are on either side of the entrance door and represent native types taken from life, as well as a corner of the native town.

Participation of the Société des Salines de Djibouti, S fax and Madagascar. - Salt is the only product of the Colony.

Its exploitation is exclusively undertaken by the Société des Salines de Djibouti, Sfax et Madagascar. The importance of this Company, whose annual exports reach nearly five million francs, is growing.

This relief shows
1° The difference in levels between the Gulf of Tadjourah and Lake Assal, the latter being at the height of -173 metres.
2° The difference in level between Lake Assal and Lake Halol, the latter being at a height of -100 metres.
3. The relatively small distances separating Gubbet-Karan from Lake Assal and the latter from Lake Halol.
4° The narrowness of the two passes which make the Gulf of Tajoutah and the Gubbet-Karah communicate with each other.
5° The impressive height of Mount Gouda, which rises at a short distance from the coast to 1650 metres.

An explanatory legend is affixed to the base of the model, which is also topped by a map of the Colony.

Mr Pierre Gandillon, in a note that he willingly makes available to those interested in the question, outlines the guiding principles of his project for the development of the French Somali Coast through the use of solar energy "La houille d'or".

This very interesting project has three phases:
First phase:
1° Construction of a tidal power plant after closing the small pass of Gubbet-Karab by a floating dock, equipped to capture the energy of the marine currents to transform it into electrical energy evaluated at 10,000 horsepower;
2° Use of the electrical energy thus obtained :
a) for the establishment of a high voltage power distribution line to meet the needs of a rest city to be built on the heights of Mount Gouda;
b) to operate dynamo-pumps drawing water from the springs of Mount Gouda and pumping it to the rest area and to the fertile coastal land at the foot of Mount Gouda
c) to start up an electro-chemical factory fed by salt tables producing the raw material to be processed.

Second phase: Expand agricultural and industrial facilities together with the production of electrical energy.

Widening the circle of use of electrical energy: construction of a road linking Djibouti to the rest area and use of trolley trucks as a means of transport.

Third phase. - Increasing the production of electrical energy by using the evaporation surfaces of Lakes Halol and Assal. The water taken from the Gulf of Tadjourah or from the Gubbet-Karab will produce, by its fall into these depressions, quantities of energy which can be evaluated at 40,000 horsepower.