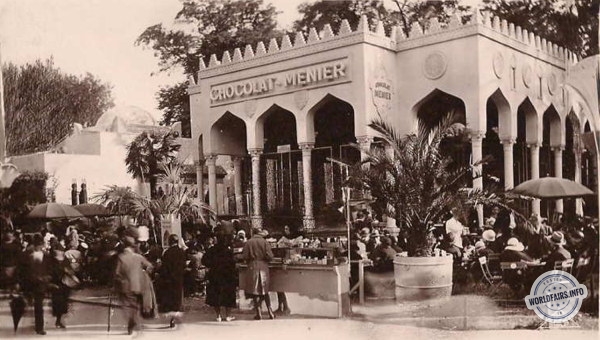 The French chocolate industry offers our Colonies an important outlet, since it absorbs all the cocoa production of the colonial group and most of its vanilla crops.

The cultivation of cocoa, which had remained very low in West Africa, has developed over the last ten years on the initiative of the Chambre Syndicale des Chocolatiers de France. Currently, colonial production reaches 40,000 tons and is therefore sufficient to meet the needs of the French chocolate industry, which is thus freed from foreign imports.

It should be noted that a very large part of this production is absorbed by Maison MENIER, for the manufacture of its various types of chocolate, in its vast factories in Noisiel. Served by water and railways, these factories include manufacturing workshops employing more than 3,000 workers. Well-ventilated houses, each with its own garden and situated along wide tree-lined avenues, make up the model Cité ouvrière, one of the first to be created. The view above, taken from a plane, shows the Factory and the City.

Without going into the details of production, we can indicate that in 1825 the annual consumption of chocolates in France was 200,000 kilograms. In 1854, the Noisiel factory alone produced 700,000 kilograms of Menier chocolate. Today, its production exceeds 60,600 kilograms per day.

The longest commentary would add nothing to the eloquence of these figures.