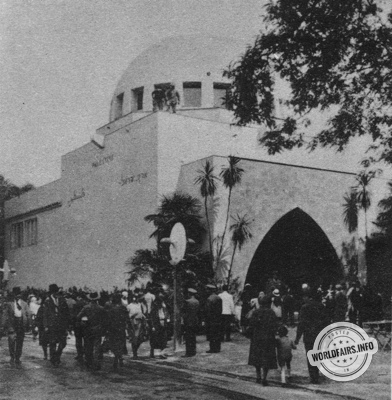 The participation of Palestine in the Colonial Exhibition is undeniably a novelty because of the character of this country, its composition and its ambitions. But would one believe that at the beginning it even seemed a challenge! It took nothing less than the passionate persuasion of M. Justin Godart, Senator, former Minister, President for six years of the "France-Palestine" Committee, to bring it to a successful conclusion.

It is certainly not that it did not seem flattering and profitable to take part in a demonstration of this magnitude and brilliance. But, on all sides, people feared misunderstandings and showed their sensitivities.

The boldest Palestinians, the Jews, the main architects of the Young Palestine, feared being taken for vulgar colonists in the service of a great power. Would not the originality and independence of their effort be lost in a colonial fame whose consecration, unwisely accepted, risked confusing Palestine with the old types of colonies?

Even more suspicious were the Arabs, nonchalant sojourners in this old land which, under the prestige of a spiritual heritage shared by three religions, the Turkish Government disinherited of all goods and material progress. In 1929, the Arabs of Palestine came to attack the Jews, who were too active for their liking. How could they be expected in 1931 to look kindly on an enterprise which they still refuse to follow deliberately and which marks, against their numerical supremacy, the supremacy of the few, admitted to the celebration and the honour which thousands of visitors from all parts of the world are at this moment bringing to it?

There was also the rigid bad temper of Englishmen who were shocked that England, whose voluminous colonial domain could not take its place at the Exhibition, after the still recent one at Wimbley, could only be associated with this small "Mandated Territory", whose management is far from convenient and uncontested.

Finally, the believers, the "old believers", Christians, Jews and Arabs alike, were not unhappy that the Holy Land, the meeting place of age-old prayers in Latin, Hebrew and Arabic, that the thrice-holy Jerusalem with its three holy places, the Holy Sepulchre, the Wall of Weeping and the Mosque of Omar, should be presented in a new guise, inspired by concerns that were sacrilegious in their eyes.

Mr. Justin Godart convened a Parisian committee presided over by Mr. Louis Asscher, with Mr. Saveli Pollack as Commissioner General, and had a Palestinian one convened under the chairmanship of Mr. Dizengov, mayor of the modern city of Tel-Aviv, and advised them both in such a way that the resistance soon gave way. Mr. Justin Godart was obstinate in his efforts to succeed. He wanted not only to convince, but to seduce everyone: the English, the Arabs, the Jews, the Catholic and Protestant missions, the rabbis, the muftis. He seduced them.

In the end, these preliminary difficulties, which it would otherwise have been superfluous to relate here, were providential. It was from them that the true meaning and physiognomy of Palestine emerged, in this unfolding of the colonial "Thousand and One Nights".

In the absence of an internal unity which has not yet been achieved (all these doubts bear witness to this); in the absence of a "colonial" unification which England, by virtue of the special jurisdiction of the "Mandates", cannot allow itself to impose or seek for Palestine, where can we find the hyphen, the point of convergence which is indispensable, whatever the cost, for a common existence?

Well, Mr. Justin Godart and the organisers of the Palestine Pavilion, prompted by the very embarrassments they encountered, found the happy formula which has now spread and will make a fortune: Palestine is, par excellence, the probably unique example of a Colony belonging to the League of Nations, and to it alone, depending on it and on it alone.

The League of Nations may have no army, no navy, no flag, and may be obliged to rely, for the exercise of its authority, on the armies, navies, and flags of the "Mandatory" nations: Here is, all the same, a case where, obviously, the Mandatory Power and the Mandated Country, in the ups and downs of their relations, after ten years of trials and downsizing of all kinds, have no recourse, it must be understood as a constant recourse, a governmental recourse, guaranteeing a regular and lengthy action of adjustment, except to the League of Nations. It is the League of Nations alone which is capable of arbitrating between the three populations of this small League of Nations which is Palestine: Christian, Arab and Jewish, and the three, four, five still ill-adjusted powers of the British Government, the Zionist Organisation, the Arab Executive and the religious orders.


In these views, the Palestine Pavilion, built by a French architect, Mr. Georges Wybo, according to the oriental architecture of the famous Rachel's Tomb; installed inside by a Palestinian architect, Mr. Sapojnikov, who came specially from Tel-Aviv, comprised four rooms: the Edmond de Rothschild Room, the Lord Balfour Room, the Theodore Herzl Room, the Jules Cambon Room. Four illustrious names, the four cardinal points orienting the new destiny of Palestine, forming its star! Baron Edmond de Rothschild, founder in the midst of the Turkish regime, at the same time as the Alliance Israélite Universelle, of Jewish agricultural colonies in Palestine, thus maintaining, in the years of the most severe neglect, a link between it and Europe, between it and France; Lord Balfour, the author of the Balfour Declaration, the starting point of Article IV of the Mandate, guaranteeing, to those Jews who wished to do so, a right of immigration and a right of settlement, in order to reconstitute in Palestine a "National Home"; Theodore Herzl, founder, theorist and first diplomat of Zionism, precursor of the Weizmanns, the Sokolovs, the Jacobsons, the Ussiskins, the Jabotinskis, in the task of ambassadors, defenders, and organizers of the "Jewish National Home"; Jules Cambon, the author of the Cambon Declaration, who, preceding the Balfour Declaration, gave its principle the friendly approval of France before the end of the war.

First room :
The decided modernization and westernization of the new Palestine were put in striking relief there, by models: that of the University, that of the large Ruthenberg "white coal" production plants which are in the process of electrifying the whole country;
by photographs, notably of the entirely Jewish and entirely new city of Tel-Aviv, which today has 42,000 inhabitants; by samples of agricultural and industrial products, some of them luxury, such as Aviva perfumes from one of the Rothschild colonies, Benjaminals; by the graphic and timetable of the Palestine Railway, and, next to it, by a tourist counter. All indications that justify the talk of "Americanism", about a surprising boom, dating from less than twenty years ago.

Second room:
How was it born? - How did it develop? - Thanks to whom?
In this room, the powerful labour and production organisations that "Americanise" Palestine have been brought together. Books, leaflets, statistical tables, samples, picturesque illustrations of work in the orange groves, of the volume of trade, pupils' notebooks: nothing has been omitted that gives an objective idea, a concrete impression of the "training" to which, at present, 170,000 enthusiastic Jews are subjecting the sleep of the ancient land, the sleepiness of the 600,000 Arabs who live there, the religious authorities, the administrative authorities. Through its Immigration and Settlement Fund (Keren Hayesod) and its Land Redemption Fund (Keren Kayemeth), Zionism is in a position to establish 93,000 new families on the land without harming the existing population, which, with the corresponding labour movement in the towns, would represent nearly a million more Palestinians, brought up and cultivated in the European way, and nearly six million dunums of land, now barren, returned to cultivation.

This magnificent initiative, together with those of the neighbouring P.I.C.A. (Rothschild Colonies) and the Alliance Israélite Universelle, coinciding with the Mosul Oil traffic which will lead to Caïffa, supported by schools, hospitals and the high influence of the University of Jerusalem, is likely to force the success of the Palestinian renaissance. Third and fourth rooms :
And already we see appearing, in addition to the pure science and traditional ideology which are constantly mixed with its most positive institutions, art, ornament, applied arts, fine arts, fine letters: beautiful furniture made of eucalyptus and orange wood; fabrics, lace, mother-of-pearl objects made by the Arabs; dessert wines and liquors; art books, paintings, sculptures. Palestinian painters and sculptors, most of them Jewish, began to exhibit in all the galleries of Europe and America. Some of them were very popular. They bought land and had houses built in Tel Aviv or Jerusalem in accordance with the most audacious aims of contemporary urbanism.


Historians, Palestinian annalists, who already add up the stages and the salient dates of the metamorphosis of this legendary region, will not fail to attribute a particular importance to its entry in the International Colonial Exhibition in Paris. For it will undoubtedly be the origin of a major change in opinion towards it. First of all, many people who were unaware of Palestine or were indifferent to it, will become interested in it. Secondly, they will see it in an unexpected light.

The fabulous names of its history will now take on a different resonance. The Dead Sea will be revived by the extraction of salts and phosphates. The Bay of Acre, the Lake of Gennesaret, the Jordan, the Valley of Esdrelon, Emeck, Carmel, Bethlehem, will combine their immortal memories with the fertility of irrigated fields, the light of cities, the productivity of machines. Above Jerusalem, whose new quarters are renewing the appearance fixed in universal piety, there is taking shape a University, whose governing board is composed of scholars from all the countries of the world and which, equipped with books in all the languages, will perhaps one day be able to aspire to the reputation which the "Library of Alexandria" once had, not far away, under similar conditions!