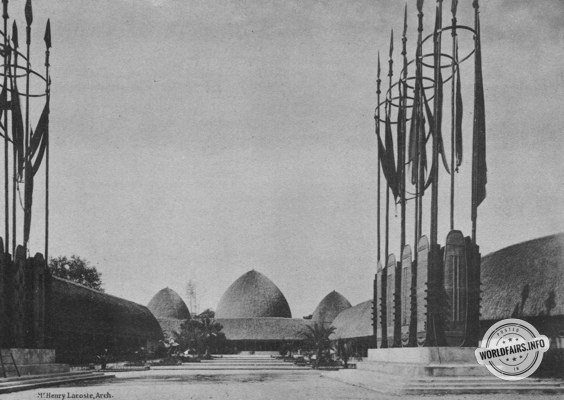 Belgium's participation in the Exhibition was particularly brilliant. As an industrial power of the first order, a great colonial power as much by the extent and value of its colony as by the magnificent efforts it has made, Belgium had to occupy a very prominent place in Paris, worthy of it. This was well understood by the organisers of the Belgian Section, headed by Mr. Henri Carton, former Minister of Colonies, Commissioner General of the Belgian Government; Mr. Gaston Perrier, Deputy Commissioner General; General Huyghe, Secretary General; Captain Monefeldt and Count Guy van der Byrch, Deputy Secretaries General, as well as the architect Henry Lacoste.

Belgium occupies a site of almost two hectares. The buildings alone cover 10,000 square metres. Belgium has always taken part in all the foreign Exhibitions with great splendour, but never before had it given its participation the importance and the splendour that it brought to Vincennes.

The visitor who follows the ring road around the lake, arriving at the Belgian Section and turning his back on Lake Daumesnil, finds himself at the entrance before a fence gate, which offers the appearance of a Congolese village. The decoration of this fence evokes the memory of indigenous customs, camps and tribal struggles.

At the back of the enclosure formed on the left and right by two pavilions stands the Pavilion of Honour, a construction that is both picturesque and imposing, which, by its proportions, by its three monumental domes, the largest of which is 28 metres high, marks the scale of the Belgian work, but which, by the choice of materials and the architectural line, is reminiscent of the African centre.

Designed in the same architectural spirit as the Pavilion of Honour, the two side pavilions give the Belgian Section a perfect unity and harmony. In this almost completely enclosed courtyard, some will think of the African "borna" or the chief's enclosure. Porticoes, composed of columns in a dark red tone and decorated with Congolese motifs, line the sides of the Pavilions facing the central garden. These porticoes are also thatched.

Benches made of Congolese wood, whose lines are borrowed from Negro art, are placed here and there.


PAVILION OF HONOUR OF THE BELGIAN CONGO

The centre of the Pavilion is formed by a circular gallery limited towards the centre by the colonnade which supports the base of the building.

The floor and the rotunda are artistically covered with a blue pavement from the glassworks of Fauquez, on which the Star of the Congo stands out: the colours of the Colony are thus reproduced in the very heart of the Belgian Section.

In the centre of the dome, in an isolation that accentuates its grandeur, stands the monument intended to recall the important role played by the Belgian Dynasty in the founding of our Colony.

The black marble base, enhanced with superb sculptures, symbolises the Congolese soil, in the depths of which the Tree of the Dynasty takes root. In a fantasy that art allows, this tree borrows its shape from the stylised lines of a palm tree and its decoration from the rich materials of the Colony. Each period of growth recalls the name of each of our Kings. From the top of this tree, which we guess will continue to grow in the future, rises a beam of light that will illuminate the Star of the Congo at the top of the vault.

The central dome, built like the others in lamellar frameworks, gives a caisson shape of the happiest effect.

The circular gallery of the main hall contains display cases with Congolese musical instruments on loan from the Instrumental Museum of the Royal Conservatory of Music in Brussels.

In the part of this circular gallery opposite the entrance, there is an enormous diorama of Congolese agriculture. It represents a view of the high plateaus of Kivu, the region most recently opened to agriculture and which gives a glimpse of the most beautiful hopes for the future.
It is known that all the rivers of Lake Kivu are now Belgian territory thanks to the annexation of Ruanda-Urundi, a province placed under Belgian mandate by the peace treaties. The initiatives taken since then by Belgium, and in particular those tending to increase the means of communication in this region and with Lake Tanga-Nyika, have singularly developed this district, which is rich in livestock, has a relatively large population and whose soil lends itself admirably to the most varied crops. Moreover, the climate in this region, already favoured by nature in so many respects, is especially salubrious. Many Europeans compare Kivu to the Italian lakes: same flora, same blue sky, same land of mountains and sun.

When the visitor enters the Pavillon d'Honneur and turns to the right and starts to visit this whole wing of the Main Pavilion, topped by one of the side domes, he finds himself in the part reserved for the extractive industries and the mining resources of the Colony. Numerous dioramas and models show the astonishing effort made by Belgium to develop these resources. At the back of this wing of the Pavilion, a diorama represents Elisabethville, capital of the Katanga Province, the copper province where the vast installations of the Union Minière are spread out.

Gold from Kilo-Moto, radium from Katanga, tin from Geomines, other metals such as cobalt, diamonds from Forminière and precious stones all have a prominent place in this wing of the pavilion.

In the left wing of the pavilion, one will stop with interest in front of the panels and the varied objects representing the efforts made in the Belgian Congo in the eminently civilising fields of education, evangelisation, hygiene, medical assistance, administration, indigenous politics, justice, territorial defence, etc...


THE GREAT PAVILION OF BELGIAN INDUSTRIES

This Pavilion, in general, includes in main order the participation of the colonial transport companies and some industries dealing with products of colonial origin or destination.

This Pavilion is on the left when you look at the Belgian Section from the entrance; there are two entrances. Let's enter through the one that opens onto the garden. After passing the colonnade decorated with motifs borrowed from indigenous art and entering the Pavilion itself, we find ourselves in the navigation section. On the right, in the hemispherical pavilion at the end of the building, a miniature flotilla represents a number of the types of boats used in Congo for river navigation. The importance of the Congo's waterways is well known: it is thanks to the admirable river network of more than 12,000 kilometres that the Belgian colony has been able to occupy, pacify and develop central Africa.

Next to the river navigation and in front of the entrance through which we entered the Pavilion, we admire the magnificent installation of the Belgian Shipping Company (Lloyd Royal). It is the company that handles most of the traffic between the Colony and the Metropolis. The stand of the Company has a pleasant surprise in store for visitors. They will have the illusion of being in Matadi, leaning against the ship's rail, looking out over the water that bathes the sides of the ship, at the diorama of Matadi as it appears to visitors arriving from Europe.

Leaving the navigation section, we move on to the railway section. One stand will attract everyone's attention: it is that of the famous Congo railway, the first to be built in our colony by General Thys, some thirty-five years ago, at the cost of superhuman efforts. It is, as is well known, the indispensable means of communication between Matadi and Leopoldville, where the falls of the Congo require the replacement of navigation by the railway. With the support of the State, the Company has spent more than a billion francs since 1922 to make this railway capable of coping with the practically unlimited traffic. It will be a great event when this important and completely transformed railway is inaugurated in 1932.

Other railway companies were also involved, which, although less glorious in their history, are no less important:
The Chemin de fer du Congo Supérieur aux Grands Lacs Africains, which dotted the map of the north-east of the colony with its sections intended to replace the navigable waterway wherever the course of the river was hampered by waterfalls;

The Katanga Railway, which links Elisabethville and the main mining centres of the Union Minière du Haut-Katanga to the very complete railway network of the British Colonies and South Africa;

Finally, the last-born, the Bas-Congo-Katanga (B.C.K.), which links this province, so rich and so far from the national access road, to Kinshasa, then to Matadi.
Let us also mention the important participations of the Vicinaux du Congo, the Chemin de fer du Mayumbé, etc...

The second entrance to the Pavilion is on the "New Road", i.e. outside the Belgian Section.

As soon as you pass the porticoes at this entrance, a large display case stands out: it is that of the Huileries du Congo Belge (Firme Lever), so important in the Congo because of their palm nut exports.

On the outside, there are stands for the chemical, food and other industries. The participation of Mr. Van Dam, the Antwerp diamond cutter, is particularly interesting: visitors will see with great interest the delicate work of the diamond cutters.

A number of agricultural societies have a stand right next to it.

In the centre, the participation of the metropolitan industries: mechanics and electricity, metallurgy, car accessories, tourism and sports. A large plane belonging to "Sabema", a company that has installed several lines in the Congo with intensive and regular service, covers the stands underneath it with its wide wingspan. Finally, an imposing "Algrain" bridge, specially built for the Colonies, can be seen.


THE PAVILION OF THE BELGIAN INDUSTRIES

It includes, in a general way, the participations of the luxury industries: furniture, crystals, bimbeloterie, precious stones, graphic arts, books, fabrics and yarns, clothes and other accessories of the toilet.

This third Pavilion is located on the right-hand side of the Belgian Section's axis from the entrance to the centre of the Pavilion of Honour, following the Section's main avenue. The layout of this Pavilion, symmetrical to the other, is parallel to this axis.

Again, a wide entrance, colonnade and portico surrounded by numerous large display cases containing the objects of the clothing industry's participation.
The Cristalleries du Val Saint-Lambert show us in a magnificent ensemble the superb table crystals destined in part for the palace of the Governor General of the Congo in Leopoldville.

In the hemispherical part on the right: yarns and fabrics, the important cotton and linen industry of Ghent with its spinning and weaving mills. The long gallery opposite the entrance to the Pavilion includes furniture in all its colonial aspects: not only furniture made from Congo wood by Belgian industry, but also all objects from the metropolitan area destined for the Colony: furniture, tapestries, etc.

In the centre of the Pavilion, the graphic arts and books: Belgian printers, engravers and publishers have come together to bring to Vincennes a particularly interesting participation due to the close collaboration of all these types of trades. This central group is surrounded on the right by a stand of the Belgo-Luxembourg Tourist Office, and on the left by the windows of the arms manufacturers.

The whole of this Pavilion cannot fail to leave the visitor with the desired impression of good taste, a true characteristic of the Belgian luxury industries.