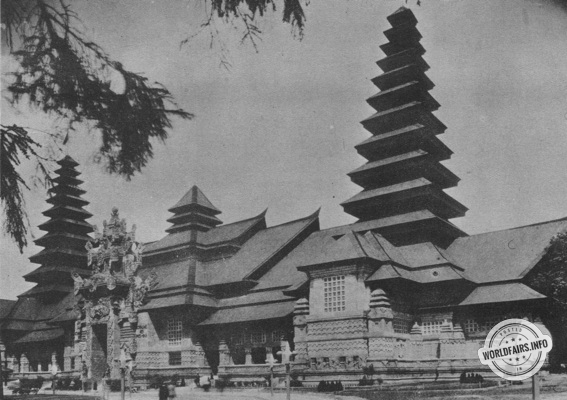 The main Pavilion of the Dutch Section had an area of over 600 square metres. The ground floor of the pavilion had been placed more than 2 metres above ground level to improve the view, and the façade was more than 110 metres wide, with the side sections and the central section protruding significantly beyond the rest of the façade. Moreover, every effort had been made to give this façade and the entire building a modern expression, while preserving the character of the indigenous architecture, so as to obtain a construction of remarkable finesse and elegance. Also from the banks of Lake Daumesnil to the Bois de Vincennes, across the lawns and the clumps of trees, the view of this façade was magnificent. The roofs of this Pavilion were in Sumatran style and raised by meroues (pagodas) to a height of 150 metres. The centre of the facade was shaped like a Balinese temple door, fully carved.

The main pavilion was entirely reserved for shipments from the Dutch East Indies, Surinam and Curaçao. At the entrance there was a reception room with a surface area of 870 square metres and a ceiling height of more than 12 metres. Apart from its character as a reception hall, it housed everything related to indigenous art, both pure and applied. The walls were decorated with large panels measuring 8 metres by 4 metres, painted on the spot by painters familiar with the Dutch Indies: they depicted scenes from the history and civilisation of these countries over the centuries. On either side of this large room was a side hall, which ended on the right with a diorama of a Java landscape, and on the left with a diorama of a Bali landscape. The vast dimensions of this reception hall and its wings gave these dioramas a most successful perspective. The two side rooms contained all the government departments: Education, Justice, Finance, Army, Navy, Colonial History; the one on the left, the land, sea and air transport departments, as well as the water and electricity departments.

Behind the reception hall was a very large central hall, in the middle of which a courtyard had been created, intended to serve as a place of meditation before entering the famous Javanese temple of Mendout, an absolutely authentic reproduction of which had been built at the end of this courtyard. This marvellous reproduction housed three statues, of a Buddha and two Budhisatwas.

Around this great hall were grouped the stands that brought together everything that concerned the population, industry, commerce and agriculture of the Dutch Indies. A summary of these various stands gives an idea of the interior layout of this large hall. On the right were exhibits on ethnography, archaeology, scientific institutions, Catholic and Protestant missions, architecture and painting; on the left were climate services, fisheries and forestry products, flora and fauna, tropical hygiene, coolie recruitment, banking institutions, import and export trade. At the back of the huge building, a series of dioramas presented the various products: sugar, rubber, tobacco, quinine, coffee, tea, rice, oils, pepper, mining and industry.

In a special section, documentation was gathered to give an exact idea of the Dutch possessions in America: Surinam and Curaçao.