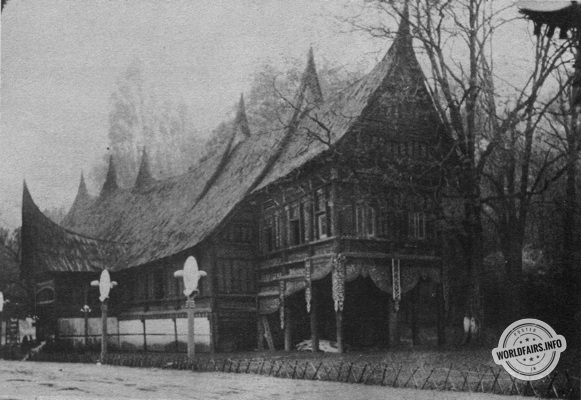 The Malay word bouatan is an abbreviation of the verb bouat-bouatan, which means: to work by hand. The root bouat is a preposition which has the meaning of: in order to.

It is to this double meaning of the word that the above-mentioned Society has borrowed its name, having as its aim to encourage the manual work and applied arts of the natives, while making them preserve their own style and character, which are truly admirable.

In order to make these various objects of art better known in Europe, the Society opened a permanent exhibition and sale in The Hague near the Royal Palace in 1903. Queen Wilhelmina took a keen interest in the work, which was as much about the welfare of the Colonies as that of the Mother Country.

Bouatan also organised exhibitions abroad, in order to make the folk arts of the natives of the Sunda Islands and the Colonies in South America widely known. In 1929 she took part in the much-appreciated Exhibition of Applied Arts at the Pavillon de Marsan in the Louvre. In 1930 it took part with great success in the Colonial Exhibition in Antwerp. Now it is represented in Vincennes, in the beautiful 'Sumatran' house of the Dutch Section.

This elegant indigenous house, with its hand-carved wooden panels, contains real treasures of popular art: fibre, cotton and silk fabrics - the famous ikat and batik, and brocades woven with gold and silver threads - engraved and embossed copper, worked leather, spartan and basketry objects, jewellery, weapons, pottery, lace, etc.: objects that fit in equally well with the traditional art of the Sumatran people. In the past, craftsmen were protected by their families, but nowadays they have no protection.

In the past, the craftsmen were protected by their native Sovereigns, their own chiefs, who commissioned and bought the finest works of art from them.

It is only right that their European chiefs should now help them in their efforts, so that their art is not lost.

Bouatan has from the beginning made attempts in this direction and will continue until the goal is reached, so that the indigenous folk art of the Colonies will not perish for lack of European appreciation and encouragement.

In the early days of colonisation, the handicrafts of the natives were regarded as little more than curiosities, hardly worthy of inclusion in ethnographic museums in Europe. It is only in recent years that their artistic and social value has begun to be realised, at a time when they were "almost lost forever".

Among the various aims of the grandiose Exposition Coloniale Internationale de Vincennes, the least is certainly not the encouragement of popular arts. Bouatan is absolutely of the same opinion as M. J. Coëz in his report to the Congress of Colonial Crafts on 5 June 1931. He underlines the following words: "We want the craftsmen of each Colony to keep their own methods of manufacture, and to continue to put on their products the reflection of their racial qualities; we want there to be always the same difference between the product of an Indochinese craft and that of a Senegalese craft, between the work of a Malagasy craftsman and that of an Algerian craftsman. "

This differentiation of goods, an inevitable consequence of the Craft Industry, far from being an unfortunate phenomenon, is on the contrary a very favourable fact. It tends to eliminate the competition between the Metropolis and the Colonies which can only exist between producers of identical products, and the abolition of competition will develop a community of interest, a feeling of interdependence between the Mother Country and her overseas possessions.

But the maintenance of the indigenous craft tradition is perfectly compatible with the achievement of progress in the operation of the trades. We consider it essential to give the craftsmen of the Colonies the benefit of scientific processes and new methods of organisation.

If all the colonising nations would collaborate in this same aim, it is certain that it would soon be achieved.