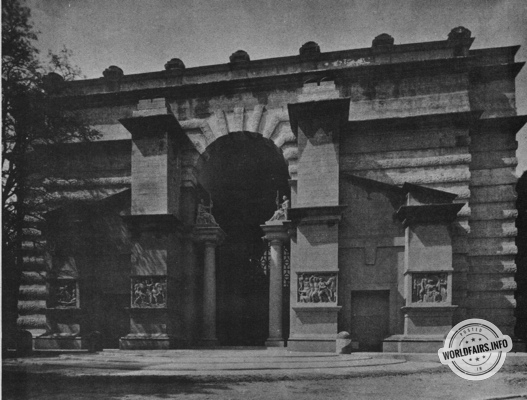 When the invitation that France addressed to Italy to participate in the International Colonial Exhibition in Paris was accepted by the Head of our Government, the Duce, in order to ensure that this participation was surrounded by the best possible chances of success from the outset, entrusted the realisation of the exhibition to Prince di Scalea. A former Under-Secretary of State in the Ministry of Foreign Affairs at the time of the occupation of Libya and the Dodecanese, when colonial affairs were only a central directorate of the said Ministry; a former Minister of War and then Minister of the Colonies during the Fascist Revolution, he was well qualified to be appointed to fulfil the functions of Commissioner General of the Italian Participation with dignity.

Given his competence and his background in the assiduous study of African colonial matters, having also spent a long time in the Dark Continent, Prince di Scalea immediately realised that Italy, because of its recent involvement in colonial ventures compared to the much older traditions of other colonising states, could not have provided a very remarkable vision of its colonising work without going back to the ancient Roman stock. For the whole coast of North Africa was one of the most important parts of the Empire. - A glorious era, from which Italy drew its inspiration to revive these places, combining, in the same effort, the reclamation of the land and the modern development of cultures, with the concern, full of filial love, to resurrect the remains of the ancient cities of the Roman era: Sabratha, Leptis, Cyrene, etc.

Following this happy idea of evoking a glorious and unforgettable past, which is common to all the countries of the Latin race, Prince di Scalea, approved by the Duce, proposed to create, on the site that Marshal Lyautey has attributed to us on the banks of Lake Daumesnil, a reproduction of a part of this past, the reproduction of a part of that admirable group of buildings which is the Forum of Leptis, due to the genius of the Emperor Septimius Severus, and precisely the Basilica, the centre of the exercise of imperial power.

The preceding lines explain to the many visitors to the Colonial Exhibition the reasons that determined our choice, and which, after a fairy-tale and uninterrupted vision of exotic styles, make them find themselves in the presence of an edifice of such pure classicism, which, at first sight, would not have been able to find a place in the evocative ensemble that has been created in Vincennes.

No one was better qualified to realize the architectural idea, either by his evocative talent or by his very pure artistic training, than the architect Armando Brasini of the Italian Academy. It is to him, therefore, that we owe the harmonious reconstruction of the old part of the Basilica and its fusion with the parts of the Pavilion that are of his creation: in particular the great portal of honour, the swimming pool, the galleries and the monumental fountain.

The artistic work accomplished by Mr. Brasini is only the most recent testimony of his talent, known not only in Italy, where he has given many proofs of his art, but also in France, where he has already built the Italian building at the Exposition des Arts Décoratifs in 1925.

This large Pavilion was intended to gather documentation on the four Colonies under Italy's direct rule: Eritrea, Italian Somalia, Tripolitania and Cyrenaica.

It was also necessary to include the Overseas Possessions, represented by the Government of the Italian Islands in the Aegean (Dodecanese). For this purpose, it seemed appropriate to entrust the task of this evocation to an architect of the young school: Mr. Pietro Lombardi, who, because of his long stay in Rhodes, where he had carried out very thorough studies of the place, was able to represent in an architectural synthesis the artistic and historical characteristics of medieval Rhodes, the ancient rampart of Christianity against the infidels and the long-time seat of the Order of the Jerosolimitan Knights.

Mr. Lambardi was all the more suitable for this task, as he had already collaborated in the direction of the work being carried out in Rhodes, under the high direction of H.E. Governor Lago, for the safeguarding of the artistic wealth of this glorious island. The Pavilion built in Vincennes is inspired, on the side of the main façade overlooking Lake Daumesnil, by an architectural motif that recalls the seven languages of the countries that participated in the constitution of the Jerosolimitan Order.

The faithful reproduction of the French and Italian inns in the Rue des Chevaliers in Rhodes, and that of the tent of a Grand Master of the Order, complete the idea that we have set out to achieve in order to give an idea of the atmosphere of the capital of the Italian Possessions of the Aegean.

This brief summary aims to show the artistic ideas that guided the Italian Government, represented in Paris by the General Commissariat, in the choice of the most representative buildings of the Section. Through the care we have taken in this part of our participation, we have tried to respond in the most dignified way to the kind invitation the French Government has extended to the Italian Government to participate in the great International Colonial Exhibition in Paris, alongside the most powerful and oldest colonising States in the world.

This participation was also evident in the City of Information, where Italy had a stand where all the information of a specifically economic and commercial nature was gathered. This idea, which was the brainchild of Marshal Lyautey, was truly original and, when examined in detail, proved to be of the greatest practical use, since it relieved the main pavilions of a whole series of tasks and duties, which were carried out much more quickly and fruitfully by the officials responsible for information and the drawing up of contracts and commissions concerning the production and trade of our Colonies under direct domination.

On the whole, the experience of these first months of the Colonial Exhibition has amply demonstrated that the aim which the Italian Government had proposed to pursue, by framing it within the vast field of the Vincennes Exhibition, has been happily achieved.