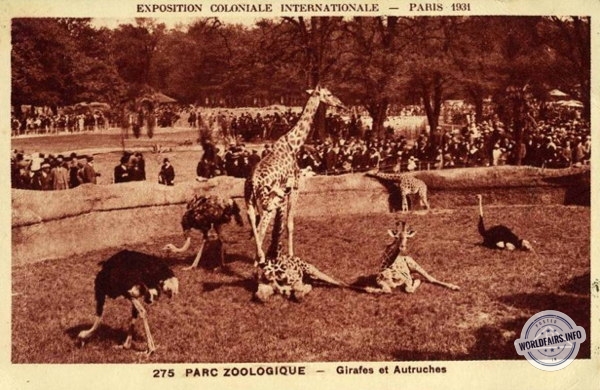 It is not a circus, but a real living museum of exotic animals. Nothing could contribute more to give the Exhibition that stamp of life and truth which will not be one of its least attractions. The flora of the tropics is largely evoked by the paintings and by the samples of agricultural products. The inhabitants of these distant territories act, come and go, live, in a word, among you. The fauna would have been missing if we had been satisfied with reproductions of naturalized animals, incapable of broadening your thoughts and sensations.

Nor are we talking about the poor animals that are usually shown to you in cramped, dilapidated rooms, behind prison bars or rusty grills. Here, a well-known specialist, the Carl Hagenbeck House, has reproduced for you one of those zoological parks in which the fauna of the tropics is presented to you in freedom, in the most natural setting possible. There are no gates, but rather invisible, impassable ditch enclosures. Sitting on the restaurant's terrace, you can believe you are on the edge of a forest, in a corner of the savannah, on the edge of a swamp; or in that lost paradise that hatred and distrust never frequented.

Just one remark: this is only a temporary park, a summer park. It lacks those massive, heated buildings that shelter the animals in winter, at their will and in all temperatures.

A word of advice: don't throw stones. It is a vile habit that some people have of insulting prisoners of distinction. It is a low revenge - unconscious, but in bad taste - exercised by people who have never run the dangers of the bush.

There is too much of a belief that the tropics are mostly deserts and virgin forests. These are only extremes. Take a walk along the path and see this African swamp with its water birds. It is a bit of a winter wonderland, a season in which it often rains at night or during the day, and even more often at night and during the day.

Further on, the African savannah presents its inhabitants: antelopes, zebras, gazelles, armed for flight, and other animals of even smaller size, but which live in peace with the former, although their temperaments and characters are very different. The young ones watch out for the powerful ones and know how to avoid the slaps with skill and familiarity.

How can they not be more worried, both of them, when there is nothing to separate them from the magnificent and wild lions that are there, a few steps away from them? It is no mystery. I have seen lions living, free and quiet, next to goats and antelopes from which they were separated only by a thin fence. The fed lions do not attack. They are not bloodthirsty.
Killing is not their sport. During the day, moreover, they like to sleep, to slumber, to relax. They are most animated in the morning and evening.

Antelopes and zebras know all this. And then there is the 8 by 5 metre deep ditch which forbids any jumping or escape.

The monkeys, on their rock, also know they are safe. In fact, they are the kind of monkeys that do not hesitate to attack
to attack the panther or man, when they are in a troop of two or three hundred. These cynocephalus, rough and intelligent, supple and brutal, show the primitive manifestations of feeling. Jealousy, anger, pleasure, greed, cunning and rage, all escape them in the slightest gesture. They are as interesting to the artist as to the observer.

Follow the walkway and you will find yourself in front of the giraffes and ostriches. This is prehistory, this is the fauna before the flood. It seems that in those remote times, before mankind multiplied, animals were as harmless as they were huge. The ostrich only defends itself by running. So does the giraffe. Worse still, the giraffe cannot exhale its suffering if it is struck down: it has no vocal cords, it is as dumb as an eel.

And here are the kings of the fauna: the elephants. They are only Indian elephants, with short ears, less formidable than their African brothers that are being tamed in the Belgian Congo. But what suppleness in its masses, what intelligence under this enormous skull, behind this small mobile eye! I wish you the luck of a hot day: you will be present at the bath, which is one of their favourite exercises.

Above all, do not think that this zoo is a useless show. Nothing that lives is indifferent to us. The further we go down the path of science, the more we see that there are no thick barriers between living beings and even between animals and plants. Here everything is set up for the betterment of the beasts inaccessible to the general civilised public, - I would even say: inaccessible to the natives, who only rarely see these mysterious and powerful inhabitants of the great bush.

Tropical species have been acclimatised in northern countries better than we have ever been able to do in our temperate climate. It has even been noticed that Nature, very maternal, has given her tropical children a coat that thickens in winter. Do we not see, in Hamburg, "lions on the snow"? To obtain such a success, which is the only one worthy of our human feelings, it is not enough to feed the animals well: one must above all love them and try to understand their habits.

I am sure that such visions will help to create the atmosphere that you have come here to seek. Wouldn't the very absence of them now seem a nuisance to you?