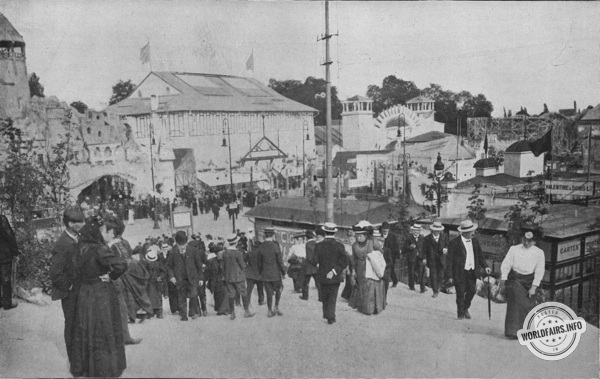 When, after having crossed the picturesque district of the Colonies, one arrived at the bridge over the Avenue du Pesage, one suddenly discovered the paradoxical swarming of the heterogeneous constructions which seemed to jostle each other in the Plain of Attractions.

Oh, what a strange and busy city!

Not everyone goes to the Exhibition to learn, do they?

We still go there to have fun. When you had had a tiring walk through the halls, when you had seen the main pavilions and crossed the gardens, you ended up in the Attractions Area. Access was free.

There were twenty or thirty attractions, each one funnier, more sensational, more curious, more moving than the last. There were the Water Bumps, the Thicklers, the Mountains Slides, the Scenic-Railways, the Mirror Maze, and other American imports of mad imagination. It was the Giant Tree, of which Micromegas alone would have been worthy to pluck one of the branches. It was the Apocalyptic Cave, into whose lair a fabulous dragon with disquieting glowing eyes would carry you away...

There was the Joyful House; there were the Charming Waves on which couples could be seen moving with a graceful ease that made the spectators admire them.

What else should we mention? The Redskins Station? The American Wild-West Show consisted of huge stands where 5000 people could comfortably sit and watch scenes from the prairie, performed in the open air by a troupe of Indians, cowboys and cowgirls. Picturesque, varied and sometimes even moving, this show was a great success from the first day.

Haunted by the memories of the impressive descriptions that James Fenimore Cooper drew of the ancient possessors of the American soil; seduced by the bold promises of the heroes of the tales of Captain Mayne Reid, that Irishman who, to tell it better, lived for two years on the banks of the Red River and hunted and traded with the inhabitants of the Far West - there was a real sympathy for these peoples for whom the "palefaces" had cruelties that had little to do with their civilizing mission? And this is probably the secret of the vogue of these exhibitions.

The American Wild West show was combined in such a way as to show us the Redskins in various aspects.

And since we are talking about primitives, let us say a word about the Senegalese Village.

The Senegalese Village! An agglomeration of huts, or rather of straw-roofed shelters, open to all winds, and under which the inhabitants initiated us into Senegalese occupations.
The children abounded, they were very nice. Good little faces and beautiful, velvety eyes, both soft and laughing.

As for the occupations in the village, they were quite basic.