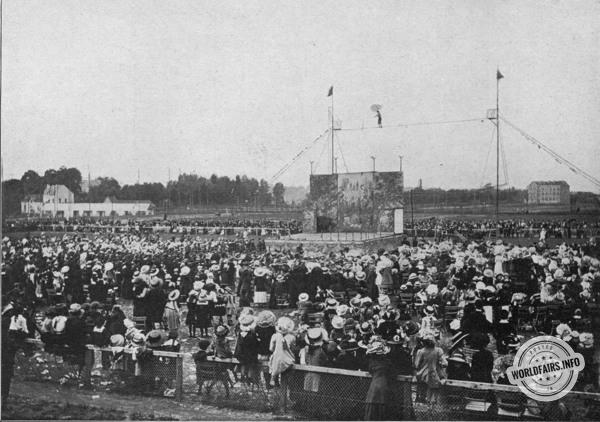 There were many sports sessions on the lawn in front of the airship hangar. We will only mention the most interesting ones here.

The practice tournament had sixty-one participants, divided into twelve pools. There were two semi-finals, one of thirty-six shooters, half of whom were kept, the other of eighteen shooters, six of whom were eliminated.

This tournament, apart from the hard-won success of M. Mathieu, was a victory for the French who placed eight of their own in the final.

The second session took place in the Salle des Fêtes.

Present for the foil were Messrs Delibes, Millet and La Chèvre (French), and De Smedt, De Bel and Rabau (Belgian).

In total, the Belgians gave 49 hits and received 25 hits.

The day ended with the épée de combat assaults.

As a result, the Belgians were declared the winners of the match.

The sports ground was opened with the International Football Tournament. Several of the most formidable champion circles took part. The Northern Nomads, from Liverpool, including several English celebrities, the H. V. V. from The Hague, the Duisburg Spiel, the Deutscher F. K. from Prague, the F. C. Bruges and the Union Saint-Gilloise.

After some thrilling battles, the best won: the Northern Nomads had a hard time beating the Union Saint-Gilloise.

The lawn tennis championships were reserved for Belgian players and foreigners who had lived in our country for at least ten years.

The men's single championship went to Mr. Willy Lemaire, from Warzée, who defeated Mr. G. Watsou, from Kortrijk, by three games to two in the final, after a superb fight.

Mr. R. Storms, who defeated Mr. L. Trasenster, and Mr. Lammens, who is a player of great future, also distinguished themselves in this event.

The ladies' championship went to Miss Dufrénoy, the brilliant player from Huy, who beat Mrs. Chaudoir, from Liège, last year's champion, by 6-4 and 6-0.

The men's doubles went to Messrs Watsou and W. Duvivier, two players from Courtraise. Mr. W. Lemaire and Mr. Trasenster were second in the final.

The men's and women's doubles went to Mr Trasenster and Mrs Chaudoir.

In the women's doubles, the steady and reliable play of Miss L. t'Schaggeny and Miss Trasenster overcame the more brilliant play of Mrs. de Borman and Miss De Mot.

The festivities began on Saturday 13 August with a night procession that brought together all the gymnasts on the Grand'Place.

There, at a given signal, the twelve bands scattered in the procession performed the Brabançonne. It was a picturesque and beautiful scene in the marvellous setting of our illuminated Grand'Place.

The delegates were then received by Alderman Jacqmain in the Gothic Hall of the Town Hall, where the flags of the numerous societies were grouped together in their beautiful colours.

The next day, Sunday morning, there was a new procession, which was much admired. In the afternoon, the gymnasts did wonders on the Sports Field and in the evening they were applauded in the Festival Hall.