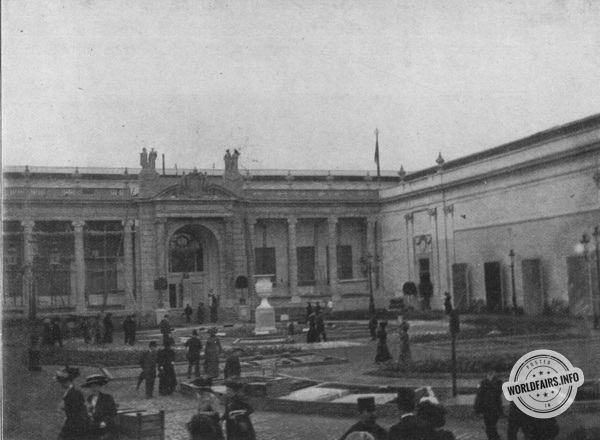 A special palace housed the Civil Engineering Section. It was one of the largest of all those built for the Exhibition. For a moment, it was hoped that it would be spared the fate of other buildings made of ephemeral materials and adorned with postitious decorations. The project was commendable; it was especially logical in the circumstances. But chance and setbacks thwarted it. Rather than see their palace completed only in the autumn, the contractors, already very late, long after the inauguration of all the other sections, decided to finish in wood, plaster and staff what had been started in stone and brick.

The architecture alone therefore appeared to us to be in keeping with the intentions. It undoubtedly gave a great air to this palace in three perpendicular wings two by two.

The Civil Engineering Pavilion was inaugurated on Saturday 18 June. Among the many personalities present were Ministers Hubert, Delbeke and Renkin, Léon Hubert, Georges Dupret, etc.

Mr Hubert gave the opening speech, to which Mr Delbeke replied. Mr. Delbeke warmly congratulated the members of the Organising Committee of the pavilion, which will allow everyone to get an accurate picture of the considerable programme of work carried out in Belgium since 1830.

The Minister paid tribute to the merit of our engineers, and insisted on the importance of road transport and on the measures to be taken to facilitate the circulation of the most modern vehicles. He promised to take an interest in the work of the next road congress and to take account of the conclusions that will be reached there.