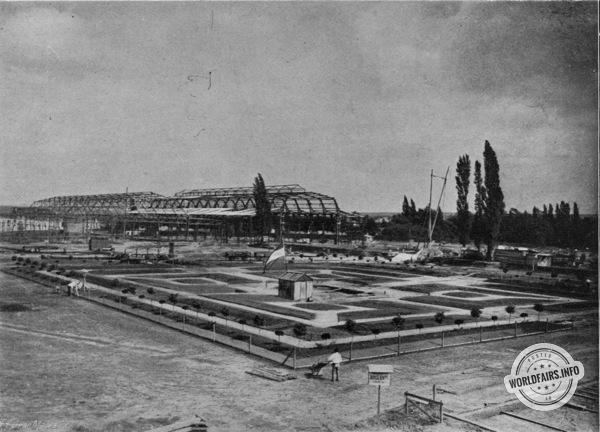 The Dutch garden is also of great interest. Created by the Dutch Horticultural Federation of Rotterdam, it is of a curious and original design.

We are in a regular garden again, but how different from the first! How to express this particular character, perhaps a little cold, but nevertheless very interesting?

It is no longer elegance, grace and harmonious proportions that characterise the garden; but we like it because of its amusing aspect, although of very sober and simple lines, because of the succession of pictures that successively present themselves to our interested eye, because of the great fantasy that presides over the arrangement of the many details.


The panorama of the garden of the City of Paris, which at one time charmed and moved us by the breadth of its lines, has given way to a series of very deliberate motifs.

Let us recall the layout of the garden - a rectangle of fairly limited extent.

In the corners are four small kiosks containing various collections and somewhat dominating the whole, while the entrance, of great character, is located in the middle of each side. The interior of the rectangle is divided in a very simple way by wide strips of various flowers, slightly downwards, separated by paths. In the centre, the lowest point of the garden, the pond is logically located, surrounded by resting places.

The different levels are - deliberately - clearly defined by a few steps, framed by pedestals with vases adorning the rest rooms.

As soon as you enter the garden, you pass through one of the well-proportioned and richly decorated gates, and a picture alone would be enough to characterise the garden. It is a wooden bench, slightly raised on a terrace and leaning against a hedge of dark green conifers, of a simple and very happy design, painted in plain white and framed by two vases lined with pruned green shrubs. This scene, dominating some brick steps which complete the whole, constitutes
an original room, a pretty corner of a captivating intimacy. Perhaps dazzling flowers in vases would have brightened it up; but I fear that they would have, for all their fantasy, and perhaps because of it, made this really successful entrance banal.

Here again, surrounding the basin, very simple in outline, and the central fountain, is a series of benches, this time in stone, pleasantly framed by pilasters with identically decorated vases.

The ensemble thus constituted is most pleasing and fully satisfies you. Thus, the same dominant thought, the same spirit, presided over the general arrangement, so as to give the whole a unique and very typical character.

All the interest of the garden lies in the originality of the details, in the layout of the successive terraces, which can be perfectly dominated from the corner pavilions, in the choice and variety of the plantations, all of which come from Holland, where the conifers, evergreen shrubs, pruned, placed at the main points, emphasise the character of the ensembles. Here a box tree is curiously erect, in the shape of a bird. Here a yew tree is elegantly trained, revealing the patience of Dutch gardeners, while further on, in wide beds, single-coloured roses, bright white geraniums, resplendent sage and other flowers, framed by the fresh green of the lawns, stand out vigorously against the dark background of the former and infuse the characteristic ensemble with colour and life.


In principle, such a garden, with the necessary modifications resulting from the layout of the site and the preferences of the individual, could certainly be adapted to many situations. In many cases, and especially for small areas, especially in cities, it would be an advantageous replacement for those conventional gardens - a pale imitation of the landscape garden - which are so widespread, although they are often hopelessly banal and devoid of character.

I will conclude here the few remarks I thought it would be interesting to submit to you on the subject of these gardens.

It is rather curious to observe that their dominant feature is regularity. It seemed to everyone, and rightly so, in my opinion, that this was the most perfect expression, the style best suited to communicate to the tired visitor, on leaving the Galleries and Palaces, the most joy, the most well-being and the most comforting calm.