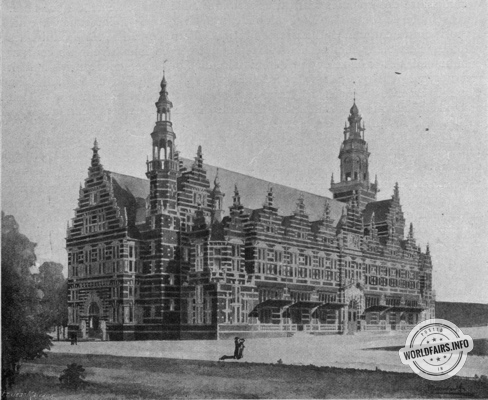 The country "enraptured by the waves" had chosen a site on the exhibition grounds in the shape of a dike.

Its pavilion occupied an area of three thousand two hundred square metres, most of which was usable. A large hall was located in the middle of the pavilion, running lengthwise. In accordance with the wishes of the great majority of the Dutch Committee, the style in which this pavilion was designed was that of the flourishing period of Dutch architecture, i.e. the Dutch Renaissance of the late 16th and early 17th centuries; It is therefore the style in which the beautiful Town Hall of The Hague, that of Naarden, the magnificent slaughterhouse of Haarlem, with its abundance of ornamental sculpture on the entrance doors and turrets, cartouches, lions' heads, arms, vases, with its spires and towers which contributed to recall with joy the ancient cities of Holland.

The Dutch Section had very happily grouped together the different branches of its commercial and industrial activity: jewellery, gold and silver objects from Utrecht, precious carpets, products of the flourishing leather industry, etc., contributed in large part to the success of the numerous visitors.

The food section, too, with its well-understood installation and the variety of products on display, attracted attention and gave an idea of the importance of this branch in this country.
The collaboration of the Dutch colonies was very noticeable.

The island of Java exhibited the most sought-after products of its fauna and flora; woods, fruits, snake skins, marvellous fabrics, shawls, coconut mats, coffees, etc., gave us a glimpse of its prosperity and commercial progress. A group of native workers introduced us to their work and production on the ground floor.
The participation of the Sulawesi and Sumatra islands was not at all inferior to that of Java. These islands showed us rare plants, carved gods, original baskets, various minerals, etc.

On the upper floors, the Dutch exhibition was completed by a series of elegantly simple and effective salons, bedrooms and dining rooms.