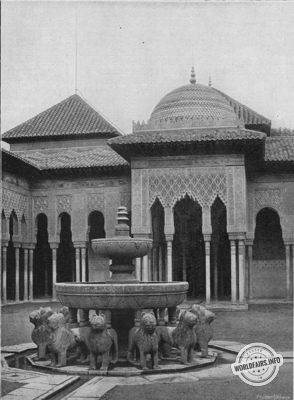 The Spanish pavilion was one of the pearls of the Brussels Exhibition. Mr. de Escoriazza had the happy idea of making it a specimen of the Moorish style and, better still, of borrowing its architecture from the most famous monument of this marvellous art, that is to say, from the Alhambra of Granada, parts of which were reproduced exactly by workers specialising in the ancient Andalusian city, under the direction of the architect and curator of the Alhambra, Mr. Modesto Cendoya.

The Spanish pavilion of the Solbosch represented the famous Court of the Lions of which we give a photographic view.

Before entering the Alcazar, in the very heart of the Alhambra," writes a French publicist, "it seems that one has exhausted all one's capacity for admiration for the landscape and the gardens; But as soon as one has crossed the threshold and suddenly finds oneself, as if by a spell, enclosed among the fantastic decorations of the Court of the Lions, the Court of the Myrtles, and so many marvellous rooms, one must forget nature for a while and find other reserves of admiration for the art of men, which has never attained greater richness and refinement: One remains dazzled before the exquisite curves of the arches, the gracefulness of the colonnades; the eye loses itself in the conch of the ceilings hollowed out and recreated with alveoli, cut with a thousand facets, bristling with pendants, in the stucco guipures of an unheard-of delicacy, where cabalistic characters mingle with the fantasy of the wildest arabesques. .. There is only one word to describe this: it is a dream of the Thousand and One Nights! "

Built according to such a model, the Spanish pavilion could not fail to attract the crowd of visitors.

The courtyard was exclusively reserved for floriculture, which added to its charm. The palace also included an underground hall of 500 square metres. Here the main producers of Spanish wines and liqueurs had their stands. They could be tasted there. The large galleries covered an area of over 1,000 square metres and were reserved for industry and agriculture. The most outstanding works of Spanish art, both ancient and modern, were displayed in a sumptuous hall of honour. On the upper floor, especially the tower, there was a terrace from which one could enjoy an incomparable view of the entire Exhibition.

The Spanish palace contributed greatly to the success of our World's Fair.