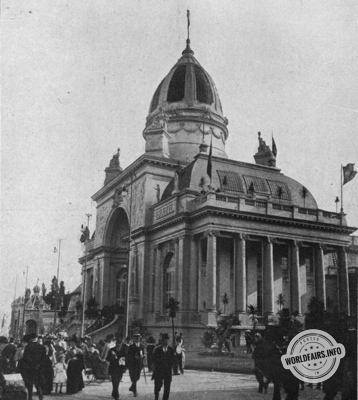 Just as this memorable Exhibition had opened under the most brilliant auspices, and its ephemeral existence was coming to an end amidst the most persistent vogue, we printed in one of the first issues of this publication: "It is impossible to overemphasize the active part that Brazil will play in the next Brussels Exhibition. It is, in fact, a country whose prodigious and rapid development has manifested itself in recent years in all branches of economic activity, attracting the attention of the whole of Europe, which sees in it a superb industrial and commercial outlet. "

Now that the grandiose palace erected in the Solbosch Gardens by a committee officially constituted by the government of the most important of the South American States has closed its doors together with all the others to which we owed it to know and admire the wealth and activity of so many countries of the vast world, it is a legitimate homage that we must pay to those who made one of the most magnificent, and most abundant, contributions to our World's Fair.

Among the millions of visitors who came to the Exhibition, I do not think that one could find a single one who was indifferent to the monument, both elegant and majestic, that the architect Van Ophem built not far from the decorative pavilion of the city of Brussels.

The scale of this construction, with its harmonious architecture, is matched only by its beauty. It is also because the interest and variety of what it contains, the way in which everything is ordered and presented, are equalled only by the exterior luxury of the building.

There was only one regret: it was unanimously deplored that such an imposing palace, a façade, a dome, a perron, and such superbly designed surroundings had not benefited from a more advantageous situation.
What advantage would not have been gained from the presence of this attractive white palace on the edge of its lawns and flowerbeds, the garden of Brussels cluttered with too many petty and characterless aedicules? What a marvellous sight would have been in store for the visitor if, before him, at the end of the great avenue which starts from the main entrance, he could have seen, in the prestigious background of the décor, this sumptuous and graceful monument?
But these late regrets are superfluous and I am told that circumstances which it is not for anyone to remedy imposed the choice of a defective site, which had the essential defect of not allowing any distance to be set back from a building whose total beauty could only be appreciated in a general view, from a sufficiently distant perspective.


The success of the Brazilian participation in itself was not compromised by the disadvantage of the topographical situation that had to be assigned to it.

How many footsteps have trodden the steps of the two spacious staircases which gave access to the entrance of the palace and whose double curve enclosed the fountain in which, in the evening, the jets and sprays skilfully coloured with all the shades of the shimmering rainbow were played out! How many eyes have admired the illumination of the dome with its glaucous transparencies which, at night, gave the appearance of a legendary or fairy-tale castle to these happy audacities of plaster, staf and glass!

It was immediately clear, as soon as one crossed the threshold of the hall of gigantic proportions, that a great deal of pride was evident in everything that was presented to the eye. But it was a pride that was both fruitful and legitimate, the pride of a people who are aware of the work of their past, the prosperity of their present and, above all, the good omens of their future.

What a journey this country has made, so diversely inhabited, so changing in appearance and resources, so tossed between contradictory political destinies for four centuries since Vespuce, Vincent Pinzon, Pedro-Alvarez Cabrai and others landed on its shores, which they believed to be the shores of an island to which they gave the name Vera-Cruz!

From the first years of European immigration, towns were founded, as soon as the explorers recognised the initial error and changed the name of Vera-Cruz to Brazil, which they borrowed from a red dye wood that was very abundant in this eminently forested land. It was San-Salvador, it was Rio-de-Janeiro, quickly industrious and populated where the Portuguese, French and Dutch organised trade with the negroes, mulattoes and Indians.

Dutch and Spanish until 1654, the vast state, rapidly prosperous but frequently troubled by discord, became Portuguese. In 1808, the French invasion of the European kingdom forced the royal family into exile, and John VI and his family found asylum in Rio de Janeiro.

But the Brazilian people were only waiting for a favourable opportunity to shake off the foreign yoke that was weighing on them. They took advantage of John's return to Portugal in 1821 to proclaim their independence and appoint Dom Pedro, the king's eldest son, as emperor.

The reign of Dom Pedro and that of his son, in whose favour he abdicated in 1821, was a steady rise to commercial power, economic, social and industrial development, and even to the artistic and intellectual greatness of an empire now admired and respected throughout the world. The new regime, however, had to struggle more and more against the efforts of federalist republicans and against incessant separatist movements. These internal dissensions led to the easy coup de force of 1889, which allowed Marshal Deadoro da Fonseca to proclaim and have recognised the Republic of the United States of Brazil.

In twenty years the population of the twenty original captaincies had grown from 10 to 13 million. From 1889 to 1909, i.e. during the next twenty years, it increased from 13 to almost 25 million.


The organisers of the Brazilian Exhibition in Brussels showed in an ingenious and striking way what their great country is like. Two wall maps were enough for this. One is an economic map showing the products of the soil and of industry in their main centres of exploitation or manufacture. We see schematically represented there the two fundamental basins of Brazil: the immense and low plains of the northwest bathed by the Amazon and its innumerable tributaries; the mountainous regions of the south and the east. This is the superb basin of the Amazon, with the lush appearance of an immense virgin forest over almost its entire surface area; it is the enormous expanse of the southern pampas; it is also the long development of the oceanic coasts, an area of incomparable fertility where all crops give unparalleled yields.

A few figures concretise what the chart merely indicates: let us bring them to these two eloquent conclusions: the value of the products imported into Brazil in 1909 was £63,724,440; that of the products exported by Brazil in the same year was £37,111,748.

The other map is even more original and above all more edifying. Within the geographical boundaries of the great South American republic, the contours of all the states of Europe have been drawn on the corresponding scale. And all of these areas fit comfortably, of course, leaving large areas unoccupied, even in the 8,337,000 square kilometres of Brazilian territory.

And then it was a matter of "illustrating" these theoretical documents, as well as the tables, diagrams, and statistics spread in profusion and which affirm the incessant development of railways, river communications, various industries, etc.

This was the role of the numerous samples placed before the eyes of the visitors.


The memory of the Brazilian participation in the Brussels Exhibition will be inseparable from the pleasure that everyone took - yes, everyone, for I believe that no one missed out - in tasting the indigenous coffee that was skilfully prepared and generously offered.

It was at the end of the 18th century that the Portuguese introduced the cultivation of coffee to the colony. Since then, it has been developing more and more successfully. Today it is, together with cattle breeding in the southern pampas, the mines and quarries of Matto Grosso or Minas Gerais, the rubber harvest on the Brazilian and Peruvian borders and the exploitation of the varied and rich woods of the Amazon forests, the main source of prosperity for the indigenous and foreign planters.

From Bahia to Port-Allegre and in an area of territory that extends to the sources of the Paranahyba, the cultivation of coffee trees is the essential object of Brazilian activity.

A very pleasant diorama showed us some instructive and picturesque aspects. They had been set up in the basement of the spacious palace, while other specimens of tropical landscapes from the fertile provinces of Sao Paulo, Grao-Para or Rio-Grande do Sul gave us an idea of the flora and fauna of these privileged regions.

I will not enumerate here the products of all kinds so skilfully presented to the visitor in shelves or showcases of an elegant luxury which made the general admiration.

The organisers were understandably coquettish in giving us multiple proofs that, from Guyana to Uruguay, from the Atlantic to Argentina, there is nothing that cannot be found, harvested or manufactured. But the blocks of rich minerals, the admirable varieties of wood with their diaphanous polish and unexpected veins, the precious stones, the seaweed, the agates, the onyx, the quartz with their magical crystallisations, the dazzling marbles of Sorocaba, deserved to hold our attention by their rare beauty.

And is it not the true purpose of such an event to awaken in the spectator the desire to leave as soon as possible to visit such a land of riches and wonders?

It seems to me that no visitor to the sumptuous Brazilian palace has failed to wish, even if only for a moment, that he or she could answer the call of this secret desire: to take the first liner leaving for Rio de Janeiro.