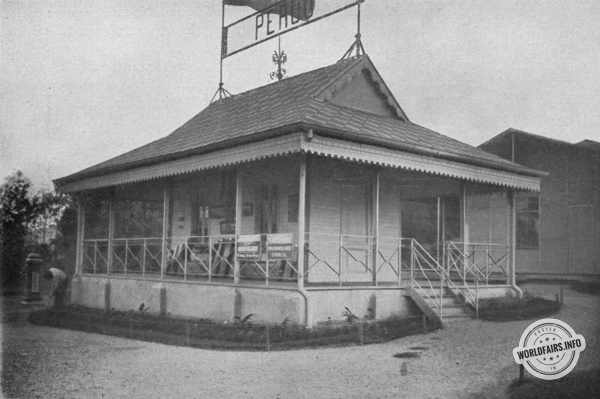 Many of the countries which took part in the Brussels Exhibition did what is generally done in such cases: they built on a site placed at their disposal a palace or, more modestly, a pavilion, the architecture of which evokes or even faithfully copies some admirable monument of the past, or some modern building.

The Florentine palace of Italy; the vast, squat, original and sober constructions of Germany; the great elegant building of the Dutch; the so perfect reconstitutions realized by the cities of Brussels, Antwerp, Liege, Ghent; the Chinese temple, illuminated and fignolated; the Tunisian souks, the white house of the Algerians; the suggestive porticoes and colonnades of the Persians and Turks; many other happy and picturesque achievements have contributed to giving the paradoxical architectural and geographical hodgepodge of the Solbosch a delightful character and variety.

It is no exaggeration to say that the success of a foreign participation is due at least as much to the outward appearance in which it is presented to us as to the abundance and interest of what constitutes it intrinsically. In all things, appearance or enclosure influences our judgement, and many of us spontaneously attach to a jewel all the more value the more attractive to the eye is the case in which it is enclosed. The wisdom of nations says that it is not the clothes that make the man; but it also says that it is the sauce that makes the fish!


Peru took a modest part in our Exhibition. However, it should not be disdained.

Peru did not stop us with the spectacle of any grandiose, rich or even simply original monument. Those who did not cross the threshold were wrong, however.

Peru did not attract attention with flashy advertisements or sensational parties; even the location it occupied, not far from the macabre Cremation kiosk and the unattractive masts of the aero-engines on the sports field, was hardly privileged, the path leading to it being haunted by crowds only at night time by fireworks. ...

It was in a dismountable colonial metal dwelling that the merchants, miners and planters of Peru sheltered their products. We had to take an even greater interest in this circumstance because this skilful and rapid construction came out of the Belgian shipyards in Hoboken.

But I am not unaware that lovers of luxury and the picturesque would have liked better to see some remarkable specimen of the ancient civilisation of the Incas looming against the green background of the Bois de la Cambre.

This is, in truth, the only reproach that could be levelled at the organisers of the Peruvian participation: they have not been more concerned internally than externally to recall that their country was the cradle and home of one of the oldest civilisations in the world and that, from the banks of the Maranon to those of the great lake of Titicaca, a race once lived whose memories and remains, which have remained abundant, are of considerable interest to artists and archaeologists.

Marmontel sang of these Incas, almost extinct, who worshipped the Moon and the Sun, held the powerful Pachacamac as the sovereign Creator of the world, and peacefully grazed their herds in the pastures of Montana or cultivated the fertile lands of the high plateaus of the Sierra, which reach up to 4,000 metres in altitude. They were also fishermen, whose boats sailed along the Pacific coast.

Weavers, potters, armourers, masons and painters made useful or luxury objects, many of which can still be found today and which it would have been original and instructive to show us.

But it is easy to understand that the difficulties of distance make it difficult to achieve what it is easy for us to wish. It is understandable that, before indulging the curiosities of artists and archaeologists without direct profit, exhibition organisers should aim to satisfy the legitimate utilitarian and economic concerns of the nationals whose immediate interests they are responsible for ensuring.


It is therefore the very modern republic of Peru and not the ancient dismembered empire of the Incas which presents itself to us in an ingenious tin pavilion and not in one of those specimens of architecture such as are to be found in the old cities which the conquest has not radically modernised.

For, after several centuries of free existence, the tribes of the Quichuas, the Changos, and the Aymaras experienced rivalries and internal dissensions, and it was thanks to these hatreds and troubles that Pizarre, this herdsman of Extramadoure, reached the most brilliant destiny of the adventurous conquistadores, Thanks to the favour of Charles V, to his undeniable qualities as a heroic conqueror, but also thanks to his duplicity, cruelty, rapacity and pride, he routed the Inca chiefs and established Spanish domination on the two Peruvian sides of the Cordillera.

This lasted for three centuries and brought various fortunes and numerous setbacks to the old mountain and maritime races, which were gradually stripped of their personality and character.

In 1825, however, Bolivar, the hero of Venezuelan independence, whom twelve young girls had once brought into Caracas on a triumphal chariot drawn by them, similarly delivered Peru from Spanish rule, a success which, in addition to his previous successes, made him conceive for a moment the grandiose dream, which remained utopian, of the Confederation of the United States of South America.

But, like its neighbours, the new republic suffered for a long time the disastrous effects of the lack of internal cohesion due to the large number of peoples making up its population, and also of the rivalries between it and the young neighbouring states of Bolivia, Colombia and Chile.
A war with the latter in 1879-1880 completed the ruin and disorganisation of the country.

In the last ten years, like most of these States, which are today, after so many difficulties, led by governments conscious of the peaceful needs of progress and civilisation, Peru has seen its population increase, its means of communication develop, its industry improve, and above all its mining, cultivation and stockbreeding production expand and become richer.

Lima has become a superb capital city, whose monumental appearance and liveliness are shown in the photographs exhibited in the Exhibition pavilion. Has it not indeed 113,000 inhabitants and is it not the seat of a government wisely concerned with everything that interests the fortune and progress of the republic?

The foreign population, which has been very small up to now, is increasing year by year. Of the 4,560,000 inhabitants of Peru, there are still only half a million settlers; but this figure is increasing year by year. The construction of the Peruvian central railway had attracted others when it was necessary to build enormous and numerous works of art in mountainous and tormented sites.

European industrialists, on the other hand, as we know from the documents and products in the Peruvian pavilion, are increasingly aware of the resources and opportunities that can be found for their activities and capital in these rich, virgin lands of almost 2 million square kilometres.

Guano, which is universally exported, is exploited on the Chincha and Viéjas islands by several Belgian firms. The limited company Etablissements américains Gratry of Courtrai showed us samples of its mattress cloth, damask cloth and other fabrics manufactured in its factories in Peru.

The silver mines of Cerro de Pasco, universally renowned, and other mines where platinum, zinc, copper, etc. are extracted in abundance, are in full activity, despite the fact that the lack of means of transport does not allow them the enormous output of which they are capable.

For it is not much, especially in such rugged regions, to have a railway network of 2,726 kilometres. Proportionally, the development of telegraph and telephone lines, which reach 8,264 and 10,429 kilometres, is more considerable. Above all, it is worth noting the presence on the Peruvian coast of five very recent wireless telegraphy stations.


Like those of Canada, Brazil, Haiti, Santo Domingo, Nicaragua, Uruguay, and Guatemala, which have been mentioned here as edifying, the Peruvian participation in our Exhibition attested to the latent wealth, the abundance of resources of all kinds which these countries, still new, offer to the industrious labour, to the ingenious valour of those who are beginning to find themselves cramped in our old lands of Europe, which are overpopulated and therefore unable to meet the needs of the millions of people who swarm there.