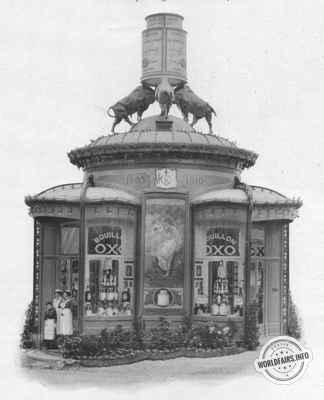 Among the pavilions that adorn the magnificent garden of Brussels at the Exhibition, the Liebig Company pavilion stands out. Its superb iron construction, which occupies an area of 100 square metres and rises to a height of 19 metres, is crowned by a group of three confronting oxen carrying a large Liebig meat extract jar on their necks.

The group was created by the famous Belgian sculptors Jef Lambeaux and Jules Lagae.

On the outside of the pavilion there are three large panels depicting allegorical drawings of the usefulness of broth for the different ages of human life. Inside and outside the pavilion, the Company exhibits its various products, which are well known. Liebig meat extract, Oxo broth, Oxo broth cubes, meat peptone, beef tongues and corned beef are just a few examples.

Visitors also have the opportunity to taste the excellent Oxo broth, the consumption of which has increased so much in a short time.

The interior of this attractive pavilion is full of information. Note, for example, the statistical figures on the size of the Liebig Company, and see the many artistic photographic views taken in the immense properties of this worldwide enterprise.

Immense, indeed, is the extent of the pastures: about one million five hundred thousand hectares, that is to say more than half the surface of Belgium!
The Liebig Company has factories in Fray-Bentos (Republic of Uruguay), in Colon (Republic of Argentina); its general deposit is in Antwerp; its capital is 27,500,000 francs.

Let us note another figure which shows the important role of these products in the food supply: the annual slaughter is about 300,000 oxen.

Cordon Bleu cooks and good housewives know the qualities and multiple uses of Liebig, which is used to improve soups and bland sauces, to prepare or spice up ordinary broth, and to spice up the taste of all sorts of vegetable, meat and fish dishes.

Consider also the high yield of the product, one kilogram of which is equivalent to the broth that our housewives would obtain by slow and prolonged cooking of about 40 kilograms of beef. Liebig meat extract is therefore used economically. What housewives are also aware of is that it facilitates the rapid preparation of dishes, makes food better and speeds up digestion, and is invaluable in the art of preparing leftover meat. When added to dishes in small doses, it greatly enhances the flavour without detracting from the aroma and taste of the dish.

Oxo broth from the Liebig Company is recommended for the convenient and quick preparation of a cup of fat-free broth. It is a liquid product with the aroma of the usual herbs; one to two teaspoons per cup of boiling water make a tasty and comforting consommé. The absence of fat means that Oxo broth dissolves evenly and completely in cold water, making it an excellent refreshing drink.

Liebig's meat peptone is very suitable for feeding the sick: a first-class dietary and restorative food for convalescents, anaemics and people with a delicate stomach.

It has often been said - and we repeat it - that the great importance of guaranteed good quality food products is that the health and life of the consumer are at stake and can be compromised. There are many products on the market, and it is up to the housewife to distinguish between the good and the bad, and to allow only tried-and-tested products whose composition and origin are known to her in the kitchen.

Liebig meat extract, which has been around for 45 years, is prepared according to the instructions of the great scholar Prof. J. v. Liebig. It consists of pure concentrated meat juice, without the addition of salt or other ingredients, prepared in the Liebig Company's plants in Fray-Bentos (Uruguay) and in Colon (Argentine Republic). The raw material consists exclusively of top quality beef that has undergone veterinary control.

During Liebig's lifetime, this control was carried out by himself and Prof. von Pettenkofer.