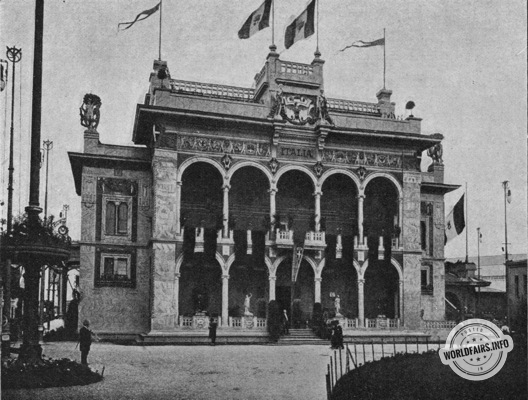 Italy's participation in the Brussels Exhibition was truly remarkable. This country had sent us the products of its industry and the works of its artists. It had an important place in the halls and in the gardens it had erected a pavilion which was indeed one of the most sumptuous offered to the curiosity of the visitor. It is, next to the galleries where the mercantile objects were exhibited, the Salon of Honour. It seemed as if this was the magnificent home where art alone should find a place. The glory of Italy is accompanied by so many masterpieces that it was only right that a sort of palace should be devoted to recalling all the memories they give rise to.

By its architecture, this pavilion evoked the Italian Renaissance; by its frescoes, the talent of its painters, and Michelangelo's statue of David, it symbolised the beauty of its plastic conceptions.

The architect Marcello Piacentini, from Rome, was responsible for the construction of the pavilion; the decoration was entrusted to Galileo Chini, from Florence, the well-known artist.

Professor Augusto Sezanne, from Bologna, was responsible for the decoration of the main hall.

To the left of the pavilion was a vast staircase reminiscent of that of the Bargello in Florence and certain similar buildings in Viterbo. This staircase was profiled in a half-arch on a lower portico, finished by a fountain and forming the background of a garden, such as one sees in the Italian charterhouses of the 14th century.

In the interior of the pavilion was placed the interesting and beautiful Exhibition of the "Arte popolare italiana", with its thousand little trinkets and its delightful female works; there was also the information office for foreigners who wished to know more about Italy.

The façade of the main entrance, towards the large international gallery, was almost completely open, Professor Sezanne having had the idea of erecting, between two large wrought-iron windows, a grandiose door surmounted by an imposing triumphal arch, also in wrought iron, which gave the whole façade a completely Italian look.

But this is the past, you might say. Urt is not a country that lives solely on the memories of its past greatness. It must walk with its century, and since the century in which we live is devoted to work and industry, it is the products of this activity which will make a people great today. Italy showed us this activity not only by the machines she exhibited in the great gallery, or by her marble statuettes, or by her works of decorative art, but also by the tables and statistics which proved to us the extraordinary extension of her ports, the fine administrative organisation of her cities, the network of her canals and her sanitary services.

The Genoa Port Exhibition was a revelation. Perhaps the largest stand in the Italian Section, one of the largest even in the Exhibition, was occupied by the "Consorzio autonomo" of the port of Genoa, that administration which was created seven years ago to manage the great Italian port of the Mediterranean. This autonomous organisation, which has given peace to the work, has been studied and is still being studied abroad. The "Consorzio autonomo" of Genoa had done nothing to make its port, its life, its resources, the organisation of its services and all that is connected with its activity in industry, commerce and work known abroad.

Much has been said about the decadence of the Latin races, and of Italy in particular, which seems to be the principal heir of their traditions. Those who have uttered this word have judged the country by a situation that no longer exists. They have not taken into account the enormous progress it has made in the economic, industrial and moral fields.