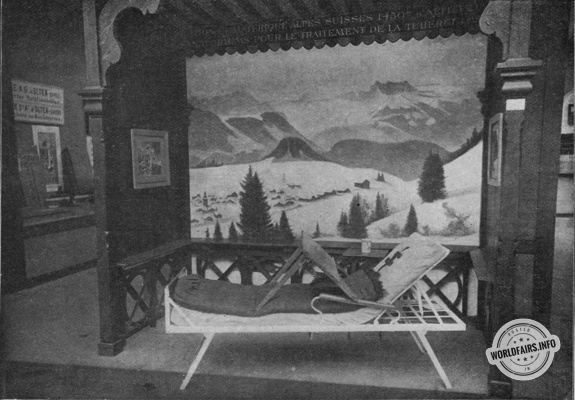 Switzerland was not officially represented in Brussels, and despite all attempts to bring a large number of exhibitors, Swiss participation was low. The Parliament (the Federal Chambers) had voted a credit of 35,000 francs, but those who wished to exhibit still had to bear heavy costs themselves. The credit allocated was not exceeded, as the exhibitors paid the installation costs, which amounted to 80,000 francs for a site of about 1,500 square metres. The Section was ready for the inauguration of the Exhibition; on 26 April everything was completed.

The Swiss participation was ninety-seven exhibitors in the industrial section, twenty in the fine arts section and one exhibitor in the temporary poultry competitions. If one were to measure the importance of the Swiss industries, this low participation would give an absolutely false idea of their character. For example, the major textile and chemical industries did not participate at all; the same was true of woodcarving. Participation in other branches, such as machinery, small-scale mechanics, electricity and watchmaking, was fragmentary and did not give an accurate idea of their importance for the country. On the other hand, the transport companies had understood the interest that Brussels could have for them and had put on a fine Exhibition. The graphic arts had a very important participation, which up to now had never been achieved by Switzerland at any Universal Exhibition. At the Palais du Cinquantenaire, the Free Association of Swiss Artists was alone represented.