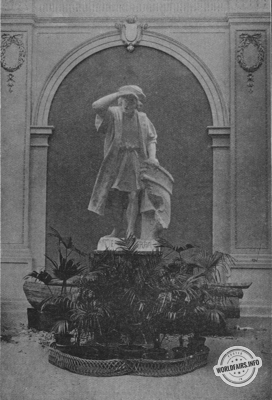 The Dominican Exhibition consisted of both products of the soil and manufactured goods, sent by various Chambers of Commerce acting on behalf of the community of planters, traders, industrialists and manufacturers in their jurisdiction and by a number of individuals who acted in their personal name.

Among the products of the plantations were coffee, as good as the best of the West Indies and Central America, cocoa - prepared with the greatest care and sent even in their pods, dried beforehand by an ingenious process, allowing them to arrive without the slightest damage - tobacco leaves, raw sugar, etc.

The exploitation of the forests was represented in the Dominican Section by an infinite variety of specimens of various hard and precious woods, used and much appreciated in the national furniture industry, such as mahogany, espénille or lemon, guaiac, grenadilla; by the campêches and yellow woods, whose value is great for the extraction of colouring matters; finally by a large quantity of samples of various construction woods whose importation would perhaps not be advisable, because of the richness of our forest species, but whose qualities for local use cannot be disputed for a moment.

The primary processing plants were represented by exquisite rums, honeys, waxes, cigars, cigarettes, etc.
The mining industry held a very high rank in this Exhibition with blocks of rock salt, gold-bearing sands, pyrites and iron ores and others.

Finally, one was astonished to see many products of industries which one is accustomed to consider as the exclusive prerogative of the old continent, such as shoemaking and soap-making. The latter industry exhibited products that were extremely remarkable, both for their quality and for the care and taste with which they were presented.