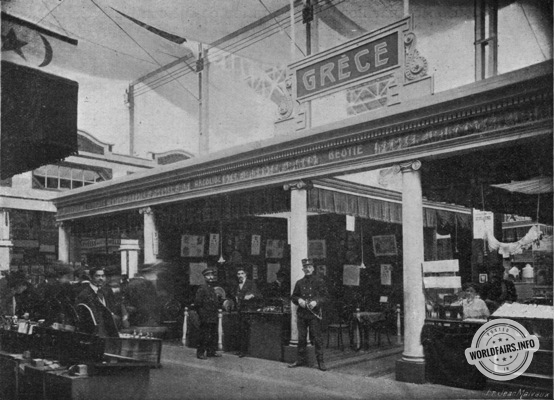 In this part of the halls, which is lively, diverse and picturesque more than any other, and which has been called the International Gallery, the Greek section occupies a fairly large area. It would be an exaggeration to say that the numerous objects and products offered there for the curiosity and choice of visitors are exceptionally characteristic and reflect all aspects of the art, industry, and economy of a country that is nevertheless extensive, sufficiently rich, and not very far from our own.

This part of the Exhibition was reserved for those nations whose governments had not officially responded to the invitation of our own, but who, nevertheless, thanks to special initiatives, had not completely lost interest in the grandiose Brussels enterprise that is universally famous today. Or they were brilliantly organised sections - such as those of Turkey, Japan, the Dominican Republic and Persia - by commissioners-general who did not feel the need to isolate themselves in separate pavilions.

Like Austria, then, like Denmark, Switzerland, the Grand Duchy of Luxembourg and Russia, here is Greece with its abundantly stocked stalls and shop windows.
But if Austria offers us its crystals, its leather goods and its delicate furniture; Denmark the opulent originality of its admired porcelain; Russia its furs and the frustrating knick-knacks made by old natives with grey beards, astrakhan toquet and long traditional cloaks; Switzerland the ingenious testimonies of its hotel industry and of the improvements of tourism; Greece has nothing or almost nothing to remind us of the sites so often immortalized in Epirus, Evia, Attica or Argos, nothing to indicate what modernism has done with the ancient civilization of the Hellenes, nothing of the glorious art of the past and the attempts, perhaps curious, of the present? ...

Greece obviously carries the heavy weight of its glorious past, and it is difficult to perpetuate with dignity such a memorable splendour as that of the famous centuries, whose slightest vestige is imposing, whose smallest memory is moving.

Greece, moreover, has for many years known the bitterness and anxiety of political difficulties. Its neighbours, its situation, the covetousness it arouses, the errors of an organisation and a regime that are often threatened throw a permanent disturbance into the whole of the ancient kingdom that does little to help its prestige and prosperity. At the time when Belgium invited the countries of the civilised world to the peaceful and glorious tournament which ended in an apotheosis, Greece was experiencing hours of anxiety whose uneasiness must have kept the leaders very distracted from what was not the legitimate concern of internal concord and peace outside.

Merchants came alone to occupy the stalls and represent the country whose azure banner crossed by the white cross could not be totally absent from the pretty and colourful group of national
national standards fluttering in the air atop the domes, belfries and flagpoles of the Solbosch.

What is important to note, however, is that if the Greek compartment is, of all those of the Exhibition, the one which, by the products seen there, characterises the least originally fart and industry of the country, by its architecture it is perhaps, on the contrary, one of the most typical in its simplicity.

It is a quadrilateral regularly cut by alleys along which the shops and outlets open. To this set of light constructions, the architect has given the elegantly classical aspect of the colonnades whose remains embellish the marvellous decorations of Athens, Mycenae and Thebes.

Graceful Ionic columns support a cornice enclosing each space. All this is white, pretty, exact and harmonious. All along the cornice, between the picture rail and the eaves, runs a frieze painted in white on a blue background and which, inspired by the graceful millenary masterpieces, unfolds the adorable procession of dancers as seen in Epidaurus and Corinth...

If we except some samples of wines collected on the banks of the Attic hillsides; lace patiently worked in the island of Cyprus; furs from the mountains of Pindus; sponges from Syria, among which opulently spreads an enormous piece of 1,200 grams fished at a depth of 77 meters on the coast of Kalymnos; lemons and oranges; some embroideries
and oranges; some embroideries, nothing of all that is offered for sale by cosmopolitan merchants has any reason to be there rather than in China, America or elsewhere.

It would be a mistake, however, to believe that the country of the hard-working and good-trading Hellenes would not have been able to send samples and evidence of the development of its agriculture to our Exhibition, liquors from Patras, malvasia from Nafplio, muscatel from Miesistra, grapes from Corinth, spices and perfumes from the Archipelago, olives and oils from Messinia, Hymetta and Salona, rich minerals especially from Peloponese and Evia.

And if sometimes the salesman with the fertile sales pitch who offers us handkerchiefs instantly engraved with our initials, sophisticated nose-clips, ingenious corkscrews, junk jewellery, lemonade, glassware made in Germany and penholders with a reservoir displays, for the sake of the cause, a name such as Leonidas or Spartakos; If a saleswoman has a matte complexion, black eyes and hair, and ties a red kerchief nicely in her thick bun, it is not enough to give us the illusion, easily acquired elsewhere, that we are living for a moment in the immortal land of Aeschylus, Epaminondas, Aristotle and Alexander. ..