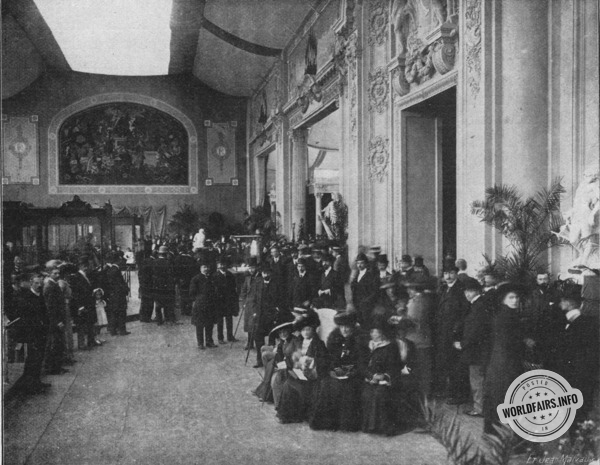 Although France was not the first country to hold a World's Fair, it was in fact the country that invented these great manifestations of economic activity. When the London Exhibition opened in 1851, the success of the national exhibitions in France had already suggested to many journalists and economists the idea of enlarging their scope and replacing them by periodic international exhibitions. The selfish and unintelligent opposition of a few large manufacturers and of protectionist chambers of commerce hindered these happy initiatives, and it took the success of the Crystal Palace Exhibition to push France along a path that she herself had traced. But since then France has played an absolutely leading role in all the Exhibitions, both at home and in other countries. She has, more than any other nation, the experience of these great universal fairs, the type of which she has powerfully contributed to fix, and which have always triumphed with that innate taste, that art of presentation and display, which is the principal quality of French industry and commerce.

The character of the French people, as well as their economic history, and even their political orientation, prepared them to play this leading role in the great international fairs. Of all the continental nations, France is the most ancient and the most solidly constituted. The French style - and style must be understood not only from the point of view of art, but in all the manifestations of social life - was already fixed at a time when the other peoples of Europe were still unconscious of their unity and their destiny. And then, while the Spaniards and Italians lived for themselves, ignoring and disdaining the rest of the world, the French, from the Middle Ages onwards, showed a decided taste for spreading their ideas and customs throughout the world. At first, this proselytism was warlike. It became peaceful, but it remained as ardent as ever, and this need for intellectual expansion continues, even in the economic age in which we live, to predominate in this idealistic people over the need to expand its trade and secure outlets for its industry.

The Exhibitions became so truly popular, they were so well regarded as a necessary manifestation of national prosperity, that the Republic, barely constituted, France barely recovered from the horrors and ruins of war, thought of showing the world France reborn: this was the Exhibition of 1878. Then came the Exhibition of 1889, the centenary of the Revolution, and finally the immense and sumptuous fair of 1900, which is still remembered by all. But the Exhibitions organised in France did not prevent the Republic from taking an active part in almost all those organised abroad. In doing so, it had a very specific aim: participation in the Exhibitions was part of the peaceful policy by which the democratic government that France has given itself pursues French influence through the arts of peace. The Exhibitions, even better than diplomatic acts, serve to affirm this new pacifist mood in France, and there is, in the courtesy it shows in appearing as brilliantly as possible in all the international fairs, a spirit of system which appears to all those who know how to look.

This very experience has the ordinary result that French participation does not generally have the originality of some countries that are very new to the art of exhibitions. All the French sections are similar, but this similarity is perhaps what makes them interesting and valuable. Why change what is good? France has invented a type of Exhibition which is an exact reflection of its average taste; why not stick to it?

French architects stick to it, and all their art and science is to adapt this type to the countries where they exhibit, to the premises that are placed at their disposal. But this appropriation, the difficulties of which the general public cannot see, requires great science, art and exquisite taste. As soon as one entered the French Section at the Brussels Exhibition, one was seduced by this air of elegant modesty. There was nothing brilliantly new, but no lack of taste. One should certainly not look for the refinements of French art in its perfect and lasting forms; one should not look for a definitive and learned aesthetic. In staff columns, under plaster capitals, in the hustle and bustle of an international fair where one has to attract the eyes of the crowd, French art had necessarily become somewhat democratised. But the skill of M. Montarnal, the architect of the Section, was to admit this necessary average, without which his work would have seemed frozen in the eyes of the immense public, which first wants joy and life in the Exhibitions, and to refine it, to adorn it, in such a way that it kept an air of distinction and elegance.

The perfect suitability of a decoration to its object was the architectural merit of the French Section, and this success is due not only to the personal talent of M. de Montarnal, but also to the merit of the whole school of which he is the representative, and above all to the artistic temperament of a people, very much alive indeed, and yet benefiting from an ancient civilisation.

Like its predecessors, the French Exhibition in Brussels - which occupied fifty thousand square metres and included more than ten thousand exhibitors - had the rare merit of highlighting very well the resources and graces of France, its natural riches and its acquired splendours. Of all the countries in the world, France is perhaps the one that Nature has favoured the most in terms of the pleasures of life. What gourmet would not delight in imagination to visit this gallery of French food, where one saw represented the great vintages of Burgundy, Beaujolais, Bordeaux, brandies, marcs, famous liqueurs, then all the tasty products of these rich provinces which, all, have their culinary speciality? Who does not think, while passing between these windows, of the old French inn, where the ordinary, prepared by the hostess, is worthy of the famous memory of Brillat-Savarin?

But France had other means of seducing: the clothing, perfume and fashion exhibitions, the displays of those illustrious couturiers who fashion feminine beauty to their imagination, attracted the most amiable and elegant part of the public, while the stands of the furniture manufacturers evoked with great art this life of society, this life of the salon which is perfect only in France.

In this art of furniture, however, if the richness of the past ensures the permanence of an exquisite taste, one might fear that it would harm the spirit of invention. It is so simple to remake the admirable furniture of the famous cabinetmakers of the 18th century: why strive to find new ornaments when it is enough to apply those designed by incomparable artists? However, France has also tried its hand at modern art, but more cautiously and often more successfully than other countries. The decorative art show that occupied the back of the French galleries in the Solbosch was charming in its entirety. It was organised by the architect Lambert, who knew very well how to group the disparate elements of which it was composed. Not everything in these furnishings was perfect, but the laborious singularities were exceptional, and what was noticeable was that the modern style in France is moving more and more clearly towards a simplification of the old styles, which makes it possible to adapt them marvellously to the needs of modern comfort.

The centre of the Salon des Arts Décoratifs Français was occupied by showcases in which were elegantly displayed a number of expensive trinkets, statuettes, silverware, ceramics, all bearing the stamp of the purest and most characteristic French taste.

This exhibition of decorative arts formed the centre of the French galleries, but it seemed to radiate over all these galleries, for the taste which had presided over its ornamentation could be found even in the presentation of the products of great industry, even in the presentation of the cannons manufactured by Le Creusot and the armour plates damaged by the aforementioned cannons. Moreover, in these delicately decorated halls, there was nothing unpleasant about these warlike machines: they appeared precise, fearsome, formidable, but they seemed to put on a good face for the visitor; they seemed to be saying to him: Our anger is not made for you. And it is still one of the characteristic features of this French Exhibition and of all French Exhibitions that this taste for not making a vain display of strength and wealth. They are, above all, peaceful and welcoming, they are amiable, they do not wish to astonish, they wish to please, and it is perhaps above all in this way that they bear the imprint of this old civilisation, the most refined, the most generous and the most humane that exists.

The brilliance of the French Colonial Section at the Brussels Exhibition attests to the unceasing progress made in the Republic's colonial domain.

Represented for the first time at the Paris Exhibition in 1889, at the Invalides, the French colonies then participated brilliantly in the 1900 Exhibition at the Trocadero.

The colonies were obliged not to limit their participation to the Exhibitions organised in France, but to be represented at foreign World's Fairs.

In Brussels, the colonial and creative genius of France was manifested in the happiest manner, not only by the quantity and diversity of the products exhibited, but also by the good taste of the installations.

The colonial empire of the Republic is so vast, its special interests are of such importance that it is an obligation for the French colonies to have their own place in all international exhibitions, next to that occupied by the industry, agriculture and commerce of the metropolis.

No power has achieved, in its colonial participation, the degree of importance that France has given to the representation of its distant possessions. Mr. G. Schwob and his collaborators, as well as the architect Ch. Lefebvre, had admirably understood their mission. The Commissioner of the French Colonies had endeavoured not only to present an overview of all French colonial activity, but also to give the Exhibition a utilitarian and practical character. To make known the products of the colonies is all very well; to facilitate their placement, to create in their favour a commercial current, is better, and the Commissioner of the French Government had left no stone unturned to ensure that this goal was achieved. Thus he had organised at the Commissariat des colonies, at the Exhibition itself, a service intended to provide those who requested it with commercial information on the various exhibiting colonies.

The French Colonial Section - except for the Algerian and Tunisian palaces - occupied ten thousand square metres at the Brussels Exhibition. The central palace, where the Salon d'Honneur was located, contained the official services of the Ministry of the Colonies, and the export products of the French possessions were displayed there. Around this central palace, in a superb colonial garden, were the pavilions of the various French colonies. Each of these pavilions offered a complete picture of the production of the regions to which it was dedicated.