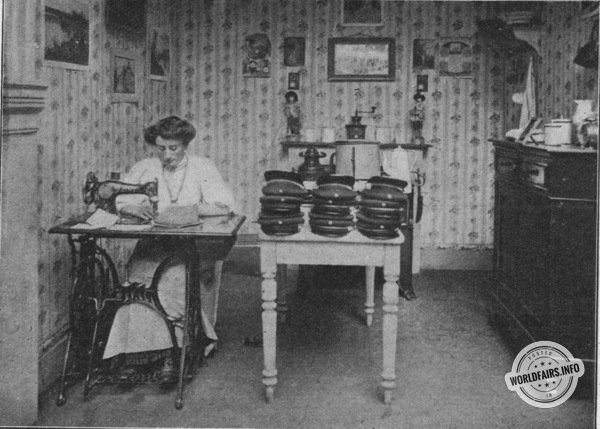 Situated not far from the Attractions Plain, in the Scheyven Park, the Homework Exhibition was striking.

Look at this brick house," wrote an editor of the Brussels Exhibition, "the decrepit façade bears the traces of the ravages of time and weather. In front of this narrow house runs a long path. On this path a man who, moving forward and backward in a perpetual walk, follows a thread of hemp that he strokes with a mechanical gesture. This is the Hamme tailor at work in his prehistoric days. At the end of the path, less free than the squirrel in its cage, - for the cage is made up of bars that leave the illusion of immensity, - enclosed in a shelter made of a closed box, a kid desperately handles a crank. Poor kid! The hard-labour at ten years old!...

Further on, the house of the arms manufacturer of Liege, which represents a little comfort. A dovecote indicates that the craftsman finds some joy at certain times. The forge hums, the hammer strikes the steel. The gesture of this worker at work has grandeur.

Opposite, crossing the park, we find the house of a weaver from Heule-lez-Courtrai. It is a pitiful place. Medieval dungeons, cramped and dark, serve as bedrooms. Upstairs, under the straw of the roof, in an indescribable swarming, the children sleep. The largest part of the house is devoted to the workshop. The trade stretches out there, grey and dreary, invading everything and filling the cell with the melancholy noise of the shuttle.

The house of the Bohan nail maker is a Ardennes masonry built of rock fragments and covered with slates. The house is a forge. The man beats the iron in a firework display of sparks. His hammer shapes shapeless spikes that will be used to nail the leather of heavy and coarse peasants' shoes. A concern for hygiene, here. A fan sucks in the noxious gas. This fan is driven by a living engine, a poor wild dog with a sad eye, which, running perpetually on the spot, turns the wheel which imprisons it. Unfortunate man, unfortunate beast... Do all living beings suffer from the poor organisation of work?

The nailmaker tells the visitor of his tenderness for the beast. He praises the intelligence and fidelity of the good animal. The anecdote is touching.

When the house was reconstructed at the Exhibition, the dog was brought to the Scheyven Park. Without the slightest hesitation, he recognised his master's house and took possession of it. One Sunday morning, probably curious about the new things he saw around him, he escaped. The nailmaker thought he was lost and lamented. On Monday morning, at work time, the dog returned and happily resumed his servitude.

The slum where the household of hair dehairers from Lokeren works is like hell. It's awful, it's atrocious, it's revolting. The atmosphere is filled with death. The suffocation is abominable. One breathes a mixture of rot and dust. The places where decaying flesh hangs, the hairs that swirl in the air, the misery that reigns, form the most repulsive and painful picture that one can imagine. One flees from this stinking dwelling and when one reaches the threshold, in the free sky, one is seized with the desire to weep, to weep over the unfortunate fate of these human beings doomed to this horror.

In the home-working pavilion, other small trades are still represented: the lingerie maker, the casket maker, the tailor, the shoemaker, the button maker, the chamber confectioner... The confectioner in the room! This profession consists of decorating tiny sweets with small lithographs, pennants, festoons, and all sorts of cheap decorations. We are shown a photograph of a four-year-old girl. The poor child is employed in this trade to assemble marzipan balls on wire rods in order to form cherries. To do this, the marzipan must be melted by the heat of a lamp and the metal twisted with the thumb and forefinger of the left hand. This movement condemns the worker inexorably to paralysis of the left arm. The four year old child was struck by this occupational disease!

The graphic section of the Home Work Pavilion revealed details about wages.

Homeworking is most widespread in Flanders. In Brussels, the book and clothing industries have room workers; in Liège there are the gunsmiths; Mechelen has the cabinetmaker; Lier and Herve, the shoemakers; Sint-Truiden and Turnhout, the lace makers; Maeseyck, the straw weavers; Verviers, the wool weavers; Binche, the tailors; Leuze, the hosiery workers; Eecloo, the hair cutters.

In Flanders, lacemaking, linen weaving, glovemaking and ropemaking provided the slum dwellers with household chores. Out of 47,490 lacemakers, 45 per cent work at home.

The following table shows the comparative importance of home work and shop work in various branches of industry:

Statistical tables tell us of the terrible ravages of occupational diseases; others give the nomenclature of the laws protecting home work.

And now let us look at the wages earned by the home workers who supply certain industries.

The casket maker earns 15 francs a week, on average.

The marble polisher does luxury work for 8.20 francs for 36 hours.

The chocolatier in the room works for 12 cents an hour.

The nail maker, the man with the faithful dog, earns 14 francs in 66 hours.

The button maker must be equipped with a special machine which costs 750 francs and is paid monthly, after an initial payment of 400 francs. She earns 13.50 francs a week. Every day she has to collect and bring back to the department stores' that employs her large packages of linen to be cut into buttonholes. This makes two daily errands under a weight of at least 20 kilos.

The cobblers of Iseghem specialise in making fine shoes for the luxury shops of Paris and Brussels. They earn 18 francs for 74 hours for this sought-after job. The shoes they make sell for 35 to 50 francs...

The Homework Exhibition was like a warning and a call among the joyful tumult of the World's fair.