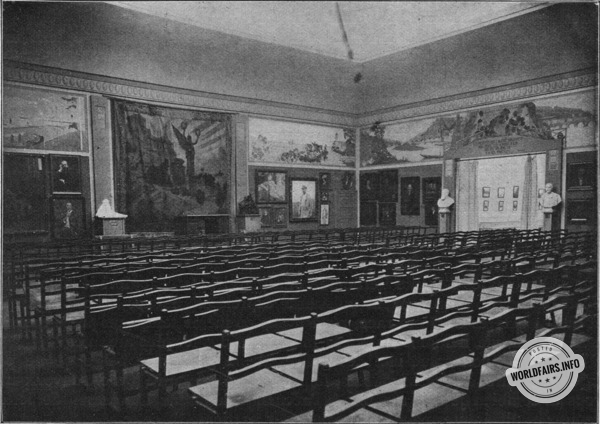 A Salon des Lettres was opened in 1910 at the Brussels Exhibition. For the first time in our country, literature was invited to participate in the glorification of national activity. This event was due to the intervention of M. Van Overbergh, Government Commissioner for Class 3 and Director General of Literature.

A commission comprising French, Flemish and Walloon writers had been appointed and placed under the chairmanship of Mr. Emile Verhaeren.

Mr. Van Overbergh presented a project for the Exhibition which received unanimous support. Mr. Chauvin for the Walloons, Mr. Coremans for the Flemish, and Mr. Rouvez for the French took charge of implementing the plan. Mr. Maus lent his good offices for the arrangement and artistic presentation of the exhibits.

The Salon des Lettres was a novelty, a surprise and a success.

It included the iconography of Belgian writers, manuscripts, books that demonstrated the expansion of their influence abroad, and bibliographical documents. It offered literary works to the informed public; it placed before the eyes of the masses interesting objects that should help their memories, arouse their curiosity and demonstrate how much literary effort was alive.

The King and Queen were received by the Minister of Science and Arts, Messrs Braun, Van Overbergh and Auguste Rouvez.

The King responded and began by saying:
"Your charming words, Mr Verhaeren, touch me deeply, and the Queen joins me in thanking you wholeheartedly.

"We are particularly happy, gentlemen, that it is the poet of All Flanders who welcomes us among you, because we have the opportunity to show him once again our admiration.

"The works of Emile Verhaeren have magnificently glorified the soil of his birth. A truly Belgian poet through his powerful expression of our atavistic forces and the characteristics of our race, is he not at the same time a world poet celebrating human life in its most ardent manifestations?

"After having greeted one of the glories of Belgian literature, I cannot say enough to all of you, Gentlemen, how pleased I am to be among you and how sensitive I am to the warm welcome of men of letters who have come from different parts of the country to take part in this festival of art.
"The Queen and I have made it a very pleasant duty to attend your gracious invitation.

"I congratulate the friends of Literature for arranging this literary salon in the middle of the Educational Section of the Exhibition. All the levels of intellectual effort imposed on youth are thus gathered around us, from primary school to university. Here, in the centre, is the domain of thought and of the ideal, that domain where, in all the independence of their talent, writers are the interpreters of the highest aspirations which must embellish the life of the Nation and enlighten its soul. "

In conclusion, the King said:
"The whole country is with you, gentlemen; it understands you, it follows your efforts and shares your ideal; it pays tribute to your immense and fruitful work; I am happy about this, because, thanks to you, Belgium proudly gives the example of a people taking its place in the noblest fields of human genius. "

The audience warmly acclaimed this speech, which the King delivered in a strong voice. Then the Sovereign expressed his desire to see Camille Lemonnier presented to him. Short congratulations, and just as the audience was about to sit down to listen to the speakers, a charming incident occurred.

Emile Verhaeren was seated on the left of the Queen, while the Minister was on the right of the King. The poet, addressing Camille Lemonnier, said to him: "This is your place, you are my senior. "

And it is the brilliant writer who takes his place beside our young and charming Sovereign.

Edmond Picard then took the floor and thanked the King and Queen, characterising their presence as a manifestation of patriotic pride in the honour of letters, and then continued with a much-applauded lecture.