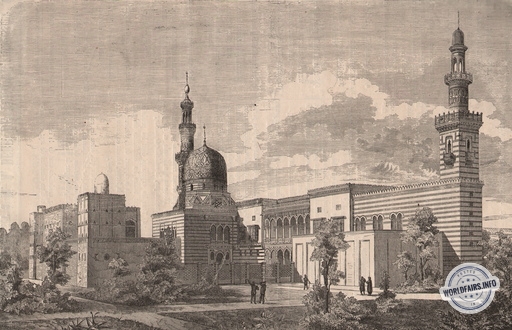 The Viceroy of Egypt has built, as if by magic, in the centre of the Vienna Exhibition, a pearl of oriental architecture. There has risen an edifice which would have amazed the spectator, even in his own capital, by its purity of form, the gracefulness of its execution and the splendour of its decoration. The effect of such a masterpiece on foreign soil, surrounded by the modern and monotonous buildings of the Exhibition halls and the numerous pavilions, is impossible to describe.
Just as a slender palm tree from the distant South, transplanted to us, outshines all our trees and shrubs with its fan-shaped crown, so this dream of a Caliph transformed into stone dominates all the buildings around it.

From whatever side one looks at the palace of Ismaïl-Pacha, everywhere it offers an imposing and charming aspect at the same time. Our drawing shows the eastern side, while the main façade, with its richly decorated middle building, and the two side pavilions face north.

The minaret on the east side of the group is nineteen toises high, four toises less than the minaret on the other side. The small, massive basement, from which the slender column of the tower rises, forms the back wall of the tomb chapel.

The minaret, built entirely of tiles, leads to a balcony, behind which is a place for the Muezzin to announce the hour of prayer.

From here, the tower becomes narrower, rounder, covered with arabesques in relief and ends in a bulbous cone. The colour is the same as that of the other walls of the building, ochre yellow, with broad reddish stripes.

On the eastern side, the main building shows one of the most graceful details of its execution, a semicircular balcony whose finely worked roof is supported by small graceful colonnettes, brilliantly coloured.

A small door, in Arabic style, serves as the entrance to the main façade, with the Koranic sentence: "You who open doors, open the best one for us!

Arabic inscriptions, taken from the Koran, surround the exterior of the building; the writing is white, on a blue or green background. Above the mosque there is a beautiful yellow domed roof with remarkable arabesques in relief. This roof is made of zinc and weighs nearly fifty quintals.

The Khedive will stay in this palace when he comes to the Exhibition. It is hoped that this building will be preserved, after the Exhibition, as one of the greatest curiosities of Vienna.