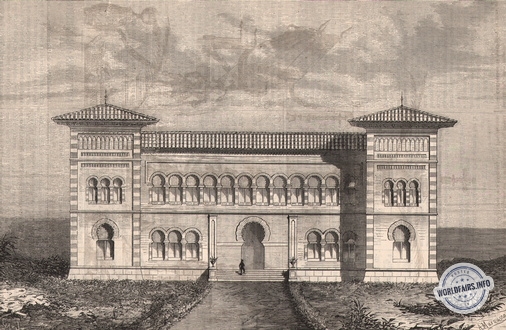 This pavilion is made up of two parallel rectangles, 22 metres long and 8 metres wide, joined together by another one measuring 24 by 10 metres.

The entrance to the pavilion is via a staircase located in the centre of the main façade, as shown in our drawing.

On the ground floor, to the right and left of the entrance hall, there are six rooms for the display of various objects, and two more on the rear façade, which have a separate entrance and are used for the offices of the commissariat and the Spanish jury.

The ground floor is connected to the first floor by a spacious staircase on the rear façade.

The first floor consists of three magnificent halls, the surface area of which corresponds exactly to that of the three rectangles that make up the floor.

The style adopted for the façade is Moorish, and the author of the project faithfully recalled the buildings of this type, preserved in Toledo, Talavera and other parts of Spain, where one can admire these forms and arches of scalloped brick, so original and which testify to the application that the Spanish Christians made of Arab architecture in the fourteenth and early fifteenth centuries.

They did not consider it appropriate to burden this style with Moorish opulence, but in exchange they succeeded in giving it a noble elegance, the daughter of severity, and at the same time demonstrated that, however crude the materials used for construction may be, by using them properly, one can achieve a degree of beauty worthy of attention and study.

The parallel side rectangles are represented in the elevation of the drawing; they receive light through the windows of the three façades; they are simple, on the ground floor, and paired in each of the rooms on the first floor: the cavities of these windows are formed by scalloped arches in the style of the period.

In the central rectangle of the main façade, there is the large entrance arch and a bay on each side; above this is a large covered gallery, the bays of which form arches of the same kind; the bays at the back correspond to those in front.

The style being given, the construction was naturally to be made of brick on the outside; but on arriving in Vienna the Spanish commission met with so much difficulty of time and execution, that they were obliged to conform to the mode of construction employed for the pavilions of other nations, the carpentry. Those who are familiar with this kind of German construction, affirm that such perfection was achieved in the imitation of other materials, that when the building was finished, it was impossible to distinguish whether it was made of brick or not.

However, it is to be regretted that, knowing the style, it was not possible to overcome the difficulties which prevented the pavilion from being made of brick, according to the project, so that the Germans could appreciate the way of building, with the brick decoration, which was bequeathed to us by our ancestors, and which is so generally employed in Austria and Hungary.

It is worth mentioning that all the decoration on the façades of the pavilion is made of the same material used in the work; the thick cornices and other ornaments of the entrance are made of brick.

José Castro and Serrano, Don J.F. Riano and D. Lorenzo Alvarez and Capra, were in charge of the pavilion project; they are part of the General Commission of Fine Arts.