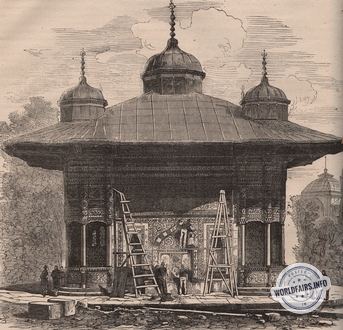 In the midst of the specimens of the lively European life which develops in the Exhibition Palace, one sometimes meets a corner of the East which strikes us by its originality.

Thus the Fountain of Sophia or Achmet does not fail to produce an immense sensation on the visitor.

It rises, in its picturesque splendour, on the most beautiful square of the Exhibition. To the south and north, there is a pond surrounded by a grassy carpet.

Around it rise the minarets of the Egyptian pavilion and the shining domes of the Viceroy's Palace.

A real corner of the Orient transported to the Park.

The exact copy of the fountain, the original of which is one of the main ornaments of Constantinople, is an elegant building whose richly decorated facades are adorned with arabesques in relief. On the frontispiece, on green tablets, a Turkish inscription reads: "Let the poor man who passes his way in, revive his soul and praise Allah from whom all gifts come".

Large verandahs, supported by double columns, give shelter to the traveller in case of rain, and their tops are surmounted by small domes dominated by the large dome of the gable.

Inside, the walls are covered with oriental hangings, while the floor disappears under magnificent Persian carpets. Low, wide couches invite the lover of Turkish dolce far niente to rest.