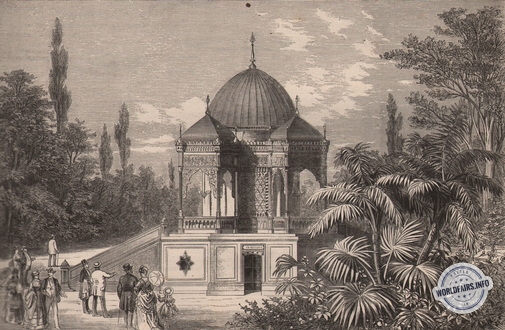 This pavilion, built in the most graceful Oriental style, is of iron, and contains objects which will scarcely be equalled in value at the Exhibition. It is the first time that the Sultan's treasure is thus presented unhindered to the eyes of Europeans and ordinary mortals.

Everything that fantasy dreamed of in the Sultan's treasures, everything that is found in the tales of the Thousand and One Nights and gives them so much charm, is here revealed to the eyes of the whole world. The treasure was transported to Vienna in two hundred boxes.

As long as the Exhibition was not yet open, the treasure was placed in the custody of the imperial gendarmerie in the Hofburg, and was temporarily guarded by the Burg guard who provided security, and also by the Turks who had accompanied it.

The value given to the Sultan's treasure is at least 200 million florins, or 500 million francs. All this is only a rough estimate and forms only a part of what belongs to the Sultan of Turkey.