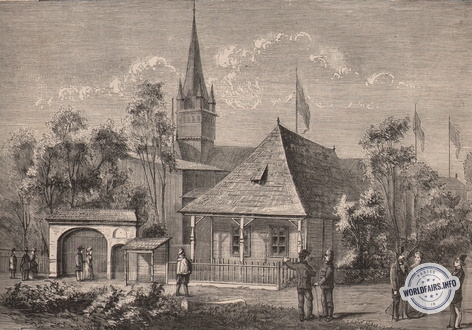 In the midst of the thousand and one treasures of art, industry, and science, we stop in front of the small thatched house which is modestly placed next to the pavilions of Vorarlberg, Switzerland and Russia. The inscription on its pediment is equally simple. Above the wooden door, exquisitely carved, are engraved in red letters the words: "If your heart is brave and your limbs healthy, enter!" and below are bouquets of large and small flowers, blue, red, yellow, carved on wood. Above the big door, there is another inscription: "Greetings to the one who enters! and to the one who leaves! With God's help this house was built by Lajos Demeter Borsodi".

In the inner chamber hangs the old pistols, next to a large and heavy sword and a bayonet called toothpick by the people; there is also an old armour, a cuirass made of mesh that weighs well over twelve pounds; perhaps it was that of a light horse; on the walls there are no images of saints, but of the heroes of Transylvania: Ben Deguez, Attila, Csaba, Arpad, Almos, who are saints to them.

Most Transylvanians are Unitarians, who believe in only one God, and they are enemies of any worship of saints.

Along the wall is a thin wooden cupboard, which holds the small earthen plates, with large yellow and blue flowers, next to clean and well-made wooden spoons. The cabinet, plates and spoons are the work of the skilled Szekler (Transylvanian).

The Szekler himself makes beautiful fans from ox horn, large straw hats for ladies, charming little shoes, large wooden pipes that can be smoked by six people at a time, large and small well-braided baskets, and many other objects, as well as the bed, table and bench.

The Szekler does not need a cupboard; he locks up what he has inside a large, bench-like box, the bottom part of which is closed. When a bride leaves her father's house to enter the husband's, she brings a bench with her dowry in it. On this bench she rests, in pairs, with her "master" later, in threes, etc.

On the table, bread and knife are always placed, and whoever enters is obliged, by the hospitable custom of the country, to eat from the piece.

They owe their origin to Attila (God's scourge), and in 1848 they formed the most faithful guard of the Hungarian troops.

If a fire breaks out in the house, the woman saves the guns first, then her children, for she is an excellent mother and faithful wife; she actively takes care of the household, and she is also the most obedient wife. The other women speak of their "husbands", she knows only her "master". The great French revolution did not proclaim any principle that these uneducated peasants had not put into practice long ago. In all of Transylvania, everyone is an elector and eligible, provided he is brave and honest.