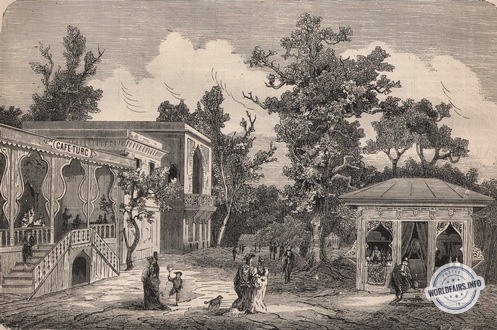 It is the most frequented Turkish café of all those oriental buildings which enjoy such great public affection.

It is situated opposite the Viceroy's Palace, between the Turkish Bazaar and the Persian Villa.

It is a square building, surrounded by an open gallery, accessible by steps.

The interior contains sideboards, the fireplace, and along the walls are wide red couches, and tables and chairs fill the gallery and terrace. The decoration of the room is entirely oriental; the ceiling is painted in colour, the sun's rays are filtered by coloured stained glass windows, and one assumes that the inevitable Koranic sentences are not missing.

If one has ever heard from travellers in the East what a strange tumult and crowd is stirred up in cafés, especially in Constantinople, and if one has heard the interesting and picturesque description of a Turkish café, one will easily get an idea of the original picture which this Oriental establishment, frequented almost exclusively by Westerners, produces on visitors. The contrast is striking, for the coffee is served to Western guests by Oriental waiters. There are native Turks, in national costume, near the fireplace formed by a shelf, on which water is boiling in a pot. This water is poured into small coffee-pots which contain the powdered coffee, and the Turks walk between the tables shouting, from time to time: Café Turc! Turkish coffee!

Another invites visitors to help themselves to long-pipe chibouks made of jasmine wood.

The coffee, prepared in the Turkish style, is not separated from the grounds and is contained in small silver cups, ovoid in shape.

Through the windows and doors, one can only see Egyptian, Turkish and Persian constructions, so that one easily gives in to the illusion of being in the middle of Turkey.

This Turkish cafe owner had first tried to embellish his black flotsam with Greek boys, but the jackets with fobs, the fez and the coloured belt over the wide trousers, did not seem to attract enough people. So the idea came to him to introduce a service of young women to provide a real Turkish picture. The only thing missing was Turkish women. But the Golden Horn is still quite far from Vienna, and the real Turkish women had difficulty leaving their harems. But our man was very determined and had Circassian, Greek and Albanian women made at the tailor's and then looked for Viennese women, which he took wherever he could find them.

His café was soon transformed, and everyone was astonished to see twelve Zulmas, Zoës, Scheherazades, twelve Turks in wool and silk, well coloured; this café worked with or rather by the Viennese-Turks, or the Turkish-Viennese, which could not be better. A little gaiety in the quarter of the silent Orientals was not to be despised.