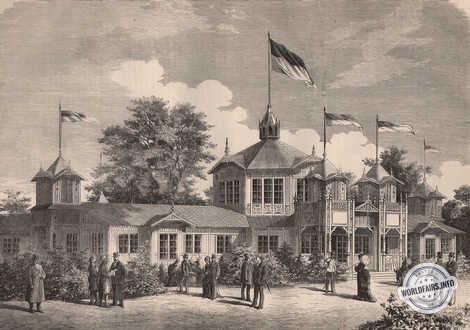 This pavilion is situated between the Palais de l'Industrie and the Halle aux Machines; it is distinguished by a beautiful style, which corresponds to the rural character that the building should have, and by a grandiose and picturesque interior that awakens the most pleasant ideas.

The Ministry of Agriculture had the task of showing itself at the Exhibition, first as a producer, then as a model of education for the entire monarchy. It is well known that the State has reserved for itself the production of salt and tac, and that the mines are its property. The great influence of the Ministry of Agriculture in a country like Austria, where the rural population predominates and whose products are of incalculable value to the whole world, is clearly shown in this Exhibition.

Something extraordinary was to be expected under the administration of the present Minister of Agriculture, Count Chlumetzky, a man of high learning and whose economic knowledge is of the greatest value. We must make sure that this expectation has not been deceived.

If only the collection of 200 ploughs were on display, it would already be enough to arouse our interest. This plough museum not only represents a large number of ploughs, but also a great variety of forms. It is both historical and ethnographic. The craftsman finds in it an inexhaustible source of study and cannot help admiring this series of perfected work.

All the nations and peoples of this country and abroad have contributed to this collection, of which one of the most beautiful ornaments is undoubtedly the Emperor Joseph's plough, a very ordinary instrument in fact, with which H. M. once set to work. M. once set to work in a Moravian field to help a peasant with his work.

We then see the products of salt works and mines, in great quantities and in great variety: dark-coloured blocks from a salt pit, almost resembling rocks, as well as crystals which could easily be mistaken for rock crystal; all these beautiful things, and even chandeliers, are made from crystallised salt. It is also very curious to see the different colours of salt: pink, blue, lilac, as well as their various shapes.

We also find tobacco, in great variety, and this is a product in which Austria can compete with the most formidable competitors.

There is also a large block of raw silver, weighing several quintals, from the mines of Przilbram, worth 125,000 francs, which is the object of special attention from the public. But the cauldron filled with quicksilver (mercury), which is one metre in diameter and in which a massive cannonball weighing 50 kilos is floating, is in serious competition with it. Our readers will remember that this mercury comes from the imperial mines of Idria (Illyria).

The forestry section is also very well represented, with samples of wood of different species and collections of harmful animals, which exert their ravages especially in the forests. This is a very useful and instructive work.

In this pavilion, the culture of vigilance occupies a favourable place. There is a very detailed and well-done wine map.

The whole exhibition is so clearly arranged, so explicit and at the same time so picturesque that the pavilion of the Austrian Ministry of Agriculture is one of the most popular in the Prater and leaves an indelible impression on visitors.