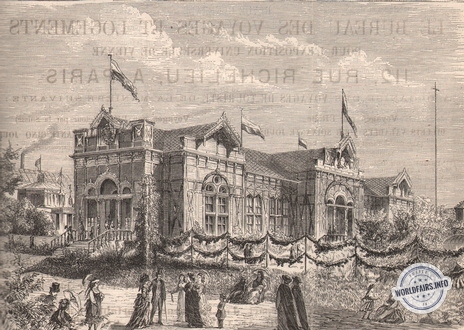 In front of the Prince of Schwarzenberg's pavilion, which is sober in appearance, there is a garden where one can see samples of almost all the species of plants that are cultivated on the prince's estate. In the middle is a small pond where two beavers live, the last specimens of a beaver colony that was brought to Bohemia a century ago and had to be destroyed after having flourished too much, ravaging everything along the river. The interior of the pavilion contains the best models of all the natural products of the prince's estates and forests, as well as of all the industrial products of his factories and plants.

There is first of all a hunting picture, opposite the entrance, which mainly captivates the eye of the spectator, because it is natural and lively. A magnificent ten-horned stag emerges from a small, thick pine wood, while a cunning fox cautiously risks its snout from its burrow, a shy hare pricks its ears, the badger runs to the den it has built for itself and several weasels look on curiously. Above the trees hover the wild goose and the duck; other numerous birds fill the air or flutter on the tips of the rocks. High above, an eagle soars majestically towards the clouds.

These trees and stuffed animals show us the inhabitants of the Schwarzenberg forests; on the left, we see the riches of the fields: sheaves of different kinds of wheat shade the most varied grains and samples of flour numbering nearly 100. Next to this are large bundles of compressed hay and hops from the nine breweries on the prince's estate, and in addition barrels of beer. The sugar refineries, alcohol, wine spirit and brandy distilleries belonging to this great owner are also represented by their products.

The breeding of cattle and evening worms is represented by photographs of all breeds of cattle, sheep and pigs, by cheeses and by a rich collection of sheep's wool and raw silk. Fruit can be found preserved on small trees, and there is no shortage of vines.
Forestry and the use of wood are represented by models of giant trees, driftwood, etc., etc., followed by various types of wood, tools and pieces of parquet.

A large part of the space is taken up by mining products, such as, for example, coal, ore, bar and smelted iron, and finally by a very complete collection of different minerals and precious stones, where there is also a place for the Bohemian garnets so well known everywhere.

The Schwarzenberg properties cover an area of several square miles in Bohemia.

The main places are Krumau and Wittingau, where the jurors for agriculture and mining, as well as a large number of exhibitors of all nationalities, made an excursion a few weeks ago, during which the prince served as a guide to his guests, and he was certainly an excellent cicerone.