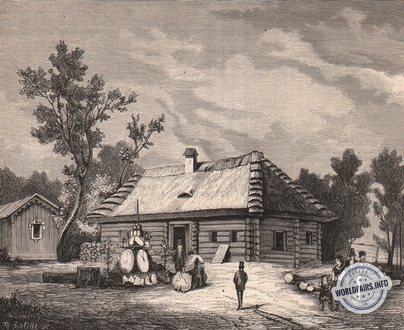 In the group of Austrian rustic houses is the miserable little Polish dwelling.

It is the same construction system as that of the Russian muzhik: superimposed beams, the intertwined tops of which are hermetically sealed to prevent the cold from penetrating into the thatched dwelling.

The double windows, whose opening is very small, let in only a doubtful daylight, sifted by panes of glass on which the prismatic colours bloom.

The oven, which is used for baking bread and food, produces an intense heat, which renders these dwellings most unhealthy; but the Polish peasant is not fussy, and provided he can smoke the atrocious tobacco at five kopecks a pound (about 20 centimes), drink, from time to time, a cup of tea, and get drunk on vodka, he easily forgets the ancient splendours of the kingdom of Poland, at present placed under the imperial sovereignty of His Majesty the Emperor of all countries. M. the Emperor of all the Russias.