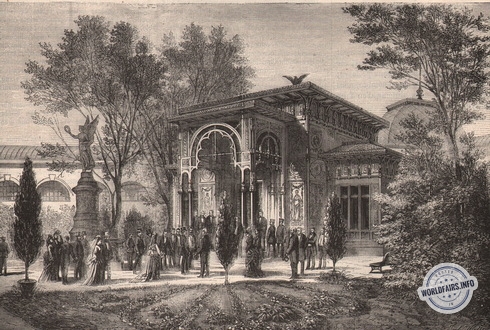 This pavilion, intended as a resting place for the foreign princes who came to visit the World Exhibition in Vienna, is distinguished by a great elegance of construction. In the interstices of the frameworks, ornaments of all kinds are drawn and painted. On a golden background are graceful genii which seem to hover in space, and at the sides of the beautiful entrance portal, two angels, with outstretched wings, support the crown and insignia of the German Empire.

It is unfortunate that such a specimen of architecture should have been placed in such a secluded spot in the Park, for it was one of the prettiest things in the Exhibition.

As for the furnishings and the interior arrangement, they must be very valuable, for the layman was not allowed to see them; and, as we are among them, we must necessarily refrain from describing them.