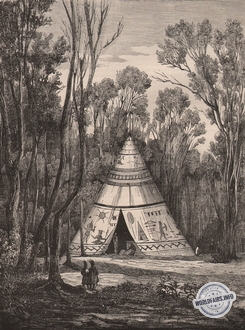 Next to the splendid official exhibition, near the styrene cabaret, rises, from the middle of a wooded area, a memory of the past Prater, the wigwam of an Indian chief. The pole of the tent rises straight up: the banner and colours of the United States float at the top, and scenes of Indian life, painted in red, seem to indicate the character of the tent, whose floating canvas is firmly waxed.

However, these paintings have nothing in common with the things that happen inside the tent. For no Indian chief prepares for war, and none smokes the pipe of peace with his reconciled enemy in the tent. No tattooed Redskin shines there, nor the scalp of a hated white man hanging from the pole. It is a mere vulgar buffet which the Yankees have set up in the tent, and for which they have not even been able to procure a real Indian, thanks to the hostile relations which now exist between the Indians and the Americans. On the other hand, in this tent where ale, porter, gin, toddies, etc., are being served, there are Gamymeds such as were at the disposal of the great Tonitruant, in Olympus, in the days of his prosperity. They are black as ebony, these gentlemen who offer the drinks, and it must be admitted that they appreciate the gravity of their functions, which almost makes one forget their African origin.