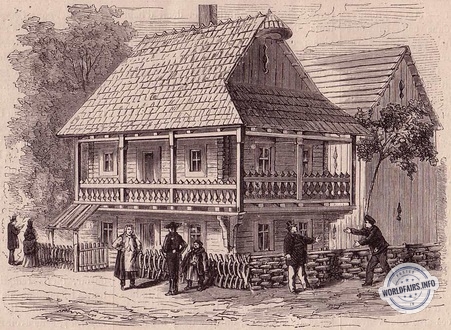 This house does not seem to be very remarkable for its architecture, but rather for the country that produced it and that really excites interest. It is a wooden house, from Geidel, one of the Haudorf villages, situated in the mountainous countries of North-West Hungary.

The Germans who inhabit this slope of the Karpathians, whose main towns are Kremnitz and Chemnitz, are originally from Flanders and Lower Rhine Franconia, whom King Geisa II (1141 to 1161) called to colonise this wild, stony, cracked ground, and, for the most part, covered with virgin forests. These colonists had to fight against the unfavourable elements of this new country, similar to those of America. They had to rely on themselves for everything: they had to build their own houses, provide for their own food, make their own clothes, and satisfy their luxury needs with their own hands.

They are distinguished from the Magyars and Slavs of their new homeland by order and discipline, by untiring industriousness and by remarkable physical strength; they have always been regarded as reliable and very honest men.

Their name "Haüdorfer", comes from the word Hau, which comes from Hauen, meaning to cut down and which is translated in the old charters as Silvae extirpatio, indicating their occupation of clearing the virgin forests of the Karpathians.

What emerges from this historical reminiscence is that the inhabitants of Haudorf, in Upper Hungary, share the fate of many German settlements, which, in the last few centuries, after the founding of cities in Germany, were transported to the Slavic and Magyar countries in the East.

In another and more important respect, the Haudorfer of Upper Hungary differ essentially from similar settlers of the Middle Ages; for they are, even today, the same as they were five or six centuries ago. It is always said that history has no end, but here the exception to this rule seems to have occurred.

The Haudorf inhabitant of the nineteenth century does not participate at all in the immense achievements of modern civilisation. He lives on his wild land as his ancestor did centuries ago; in other respects he relies only on himself, and each one satisfies his daily needs in his small house. He wears shoes made by himself, cloth he has woven, trousers and clothes sewn at home, even the sheep's skin cap and the wide-brimmed felt, all made by his own hands. He himself builds his house, and his art of construction has been passed on from father to son, so that the house, built in Geidel and displayed in the Prater, differs in no way from the Haudorf houses of the Middle Ages.

This country is like an isolated island in terms of its culture and language, surrounded by Magyars and Slavs, and by a civilisation that does not reach it.

The house, built with beams, is one storey high, and is surrounded by a wattle and daub made of interwoven laths, supported on the inside by clay.

Through the entrance door you reach the "Fürhaus" vestibules, and after passing through it you reach the Stübel, a small chamber. This room serves as a kitchen, with a fireplace without a chimney. The smoke passes through the door and windows, and despite this, fire is very rare.

To the right of the Fürhaus is the main room. Above these rooms, on the first floor, is the Bühne (attic), while the space above the bedroom is divided into two rooms, which serve as storage rooms or the bedroom. From here, a door leads to a balcony, which usually surrounds the outer façade.

There is also a space under the roof, usually empty, which the inhabitants call "Oeberschta".

The exhibition house is identical to the one in Haudorf. In addition to the table and chairs, it contains a gigantic tiled stove, the Almrei, a beautifully painted cupboard, and a dresser with its crockery, followed by the distaff, spinning wheel and loom.

In the small room there is a large number of kitchen utensils and other items, of which there is an even greater quantity, as the inhabitant of this house is not only a farmer, but also a miner, hunter, fisherman, coalminer, weaver, draper, tailor, cobbler, carpenter, etc.

The Haudorf house at the exhibition was built at the expense of the Presburg Chamber of Commerce and Industry by the inhabitants of the Geibel.