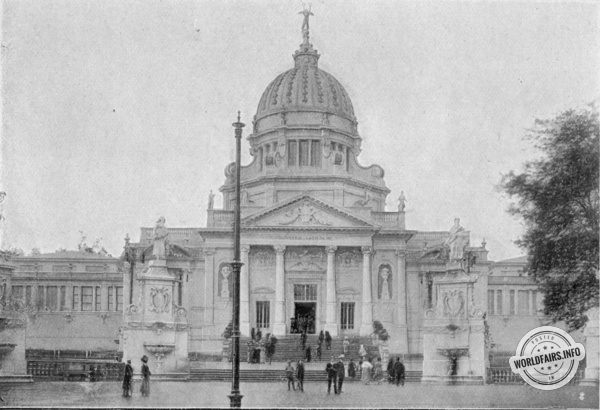 The entrance to the Valentino Park, at the corner of the Cairoli and Victor-Emmanuel II courtyards, near the monumental Humbert I bridge, also marks the main entrance to the Exhibition.

It is the most charming and rustic entrance, as befits a park. No triumphal arch, no portico of honour! Only a short colonnade, in the style of the 18th century, guarded by a few allegorical statues, such as one sees at the entrance to the princely villas of Lombardy and Rome. Groups of secular trees entwine their branches and foliage above us, weaving arcs of greenery across the sky. Far, far away is the modern city, with its noise and traffic, and we can dream freely in the poetry of the wood, in front of the green line of the hill, on the edge of the calm waters of the Po, already under the spell of the enchanting city we are going to visit.

On the right a great white palace, with high ridges and a bold dome crowned with a winged Victory, immediately attracts our attention.

This is the palace of Industrial Art, where decorative art has created a home worthy of it, before spreading its treasures over the entire park.

The avenue that leads to it ends in a large flowery space, surrounded by balustrades, brightened up by fountains that repeat their pleasant song, decorated with statues that smile on all sides. The building, examined closely, reveals a great movement of lines, an abundance of forms, an exquisite elegance of decorations, an incomparable variety of tones. It is the triumph of the tasteful baroque that could already be admired in the main entrance and in the Salon des Concerts at the National Exhibition of 1898; it has been erected here as a system; it has been subjected to the harsh discipline of constructive fantasy. The richness of style and decoration of the eighteenth century first appeared in Turin around 1650 with the works of Castellamonte and Lanfranchi, and reached its full development between 1680 and 1720 with Guarini and above all with Juvara.

The architects of the Exhibition - let's name them right away to give them credit - the engineers Fenoglio, Molli and Salvadori, made the entire Exhibition in the local style. This ingenious idea has two advantages: it gives the International Exhibition an indisputable character of artistic seriousness and it reveals the existence of Piedmontese architecture, full of ideals and originality.

The wide semicircular staircase leads to a gallery with interior colonnades which contains the large octagonal hall, decorated with circular niches in the corners, rich in decorations and statues, surmounted by the dome 45 metres high above the pavement. This octagon will remind many visitors of the analogous octagon of ceramics at the 1898 Exhibition, located at the intersection of six galleries.

In the octagon and the side galleries, the various branches of art applied to industry, such as metals, ceramics, furnishings and room decorations, are arranged in a methodical manner.

The galleries of the Palazzo delle Industrietà Artigiani extend and develop in an originally turbulent perimeter, through the groups of trees of the small mountain located at the corner of the Massimo d'Azeglio and Victor Emmanuel courtyards. These undulating groves form a fresh green setting, from which the Palace of Artistic Industries emerges, white and pretty, with its graceful and light lines.