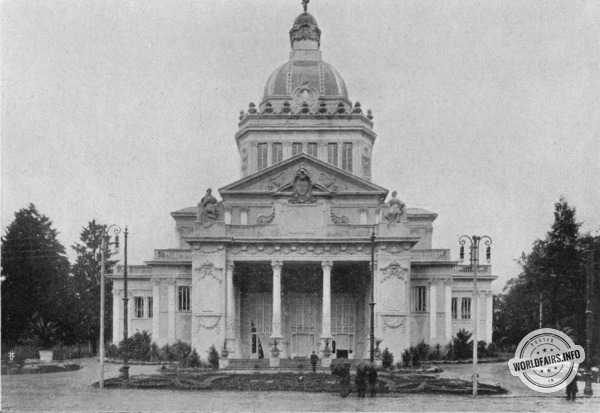 The City of Turin exhibition occupies the last pavilion of the decorative arts, towards the avenue of the Botanical Garden; its large dome is 47.50 metres high and its surface area is 1400 square metres.

With the rich and majestic façade of its pavilion, facing the park, Turin seems to welcome the cities and sister nations that have accepted its invitation and taken part in the international festival of industry and work.

The pavilion consists of a vast square hall, surrounded by a gallery, also square, with four advanced bodies in the centre on each side.

The exhibition is very interesting and will certainly be a subject of rational study and sincere praise by the Commissions sent by the other Municipalities. Turin, which has seen its population double in the last fifty years, has had to solve in this time the most difficult problems of urban management, from drinking water to sewage, from lighting to the transport of electric energy, from the establishment of workers', professional and industrial schools to the evacuation of the central districts deprived of air and light. The municipalization of a part of the electric tramways, pushed more and more towards the periphery; the construction of a new post office and telegraph building, of a new headquarters for the telephone company, the new bridge over the Po, are all questions that were still burning yesterday, that have agitated the population of Turin in the last few years and that the visitor finds completely resolved.

Among the drawings and albums on display, the plastic relief of the Riparian River basin and the
Dora Ripaire and the French border slope as far as Briançon and Modane, which was made on the express orders of the Electricity Company and the Municipal Railway Commission.

The relief map, made up of two panels, one measuring 1.90 x 2.30 metres and the other measuring 1 x 2.30 metres, includes the very long basin of the Dora Riparia and part of the basin of its tributaries.

The relief map in question makes it possible to follow on the ground the entire development of the municipal hydroelectric service, with the canal from Salbertrand to Chiomonte, where the central station operates, and with the transmission lines from Chiomonte to Turin.

The execution of the map was also decided upon by the permanent Railway Commission of the Municipality, because it is related to the question of the Alpine crossings around Turin. Naturally, the map includes the area where the new, gently sloping base tunnel from Modane to Exilles is to be opened; in this respect, the relief will be of great interest to France, which is just as interested in the new international tunnel as Italy.

The relief is on a scale of 1:25,000, for both planimetry and altimetry. It is the work of Mr. Dominique Locchi, a well-known and appreciated cartographer, who has produced other plastic reliefs, including: the Province of Turin, the Piossasco Quarries, the Apuan Alps, Lake Como, and Trentino, which will be on display in the various pavilions of the Exhibition.