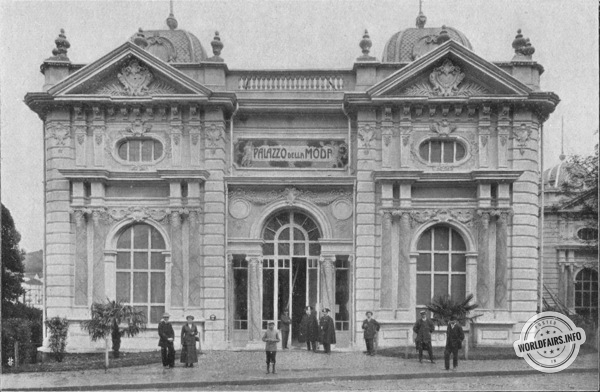 While we lingered at the Industrial Art and Modern City Exhibitions, a colourful and picturesque crowd had already invaded the rooms of the Fashion Palace. It is a crowd composed for the most part, understandably, of ladies; for them fashion, this skilful art of embellishment, has never called in vain. This time, however, the entire public, even the male public, will be interested in the exhibition, for it constitutes, along with the exhibition of the wonders of electricity which we shall visit later, the most attractive new feature of the exhibition.
This exhibition is the most attractive novelty, the last word in modernity, of the International Exhibition.

The purpose of this exhibition is to give fashion, which has been so variously and unfairly judged, its rightful place in modern life. Fashion, when we do not restrict it to the ways of dressing, but when we take it in the much broader and more comprehensive sense of decorating our homes with taste, has a function of educating society that no one can ignore. The house, with the layout of its rooms, with its furniture, with its ornaments, reveals the tastes and tendencies of the person who lives in it; the evocation of the Fashion Palace at our Exhibition will remain as a historical document of our intimate life at the beginning of the 20th century.

The Palazzo della Moda occupies the undulating meadow to the left of the entrance, with a beautiful view of the Po River and the Turin hills. This place, one of the most picturesque in the Valentin area, was for many years the home of the Swiss Dairy. The calm solitude, the cool mountainous meadows, the green and pretty landscape of the hills give the perfect illusion of the countryside. The Exhibition only added a new note of beauty with the palaces of the Argentine Republic, Latin America and Brazil, which on the other side of the river, opposite us, set their polychrome facades into the Po.

On entering the pavilion, the crowd of visitors is surprised to find themselves in front of another crowd, that of the actors. The idea of presenting animated fashion, by populating its enclosure with wooden mannequins and living figures, was an idea of genius; it is one of those inventions which are sufficient to make a section successful.

The vestibule, where all sorts of people are crowded together, reveals that today there is a reception in the palace. Between the bows of the servants and the stolid figures of the footmen, gentlemen and ladies disappear into the hallway, heading to the left. They enter the small tea room, extremely elegant in its intimacy, where the mistress of the house is surrounded by her friends in visiting costume.

Witty remarks, worldly indiscretions and artful tips pass the time; it's time to go to the next dining room. We enter just in time to admire the new evening gowns, highlighted by the lovely movements of the ladies as they take their seats at the table.

The festivities quickly died down; dinner was over; it was the next morning. First, in the adjoining dressing room, Madame does her hair; then she goes into the bedroom in her bathrobe and receives her children, who come to say hello to her and give them a motherly kiss.

The right wing of the pavilion surprises us with its original rooms of distinguished elegance. Let's cross the hallway; here is first of all the library, in the Louis XVI style, severe and collected. Then the buffet, animated by a group of gentlemen who are waiting for the moment to go into the adjoining dining room. After dinner, there is a concert in the large ballroom, where the gold-framed mirrors reflect the sparkle of the diamonds and the glittering reflections of the magnificent costumes.

The modern house is not only open for parties and welcomes not only friends of the parents. As one moves through the flat, one finds the salon and the bedroom of the mademoiselle, fresh with youth and grace in her morning dress; one finds the nursery, an English institution like its name, the quarter of the children who indulge with the gaiety of their age in their favourite games, among nannies covered with ribbons and lace and maids who strive in vain to bring some order and silence to this bustle.

The fashion palace has not yet said its last word to us with its double row of flats. In the circular partition that connects the right wing with the left wing of the pavilion, the secret of its dioramas is hidden. The dioramas, scenes of large dimensions, illuminated by a special play of light, with the foreground executed entirely in plastic, are one of the most modern expressions that art has created to give the spectator the absolute illusion of the animated real.

The fashion dioramas, painted by Georges Ceragioli and Jean Giani, are three in number. Going from right to left, after the nursery, we see first the diorama of the skating rink, then that of the paper-hunt, and finally that of the beach, with the rotunda of establishments populated by bathers. Naturally, these scenes of elegant life offer visitors the opportunity to admire the different ways of winter, summer and autumn.

The fashion palace, which already houses so many wonders of good taste, did not need to be very showy on the outside.
It is a quiet, simple mansion, 60 metres long and with a surface area of 1500 square metres, but it is recommended for its comfort, its beautiful country views and the practicality with which it was built and the interior layout of the flats was designed.