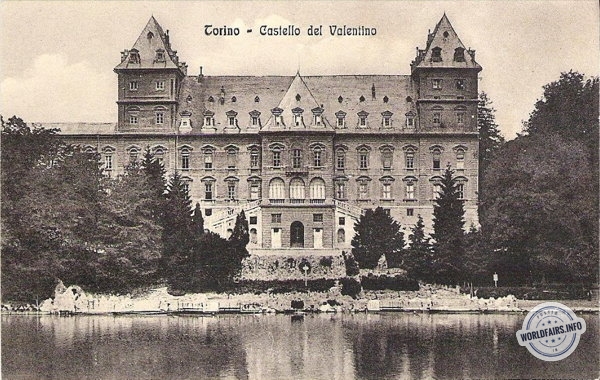 He is the master of the square and, although he has remained outside the enclosure, we owe him a visit before ending our first tour of the Exhibition close to him.

The name and fate of Valentine are linked to two names of illustrious and beautiful women, Valentine Balbiano, wife of René Birago, President of the Parliament of Turin, and Marie-Christine of France, Regent of Piedmont. Valentine Birago did not give it its name, which, according to tradition, goes back to an ancient chapel dedicated to Saint Valentine; but she felt the poetry of this place and began to make it known by building a castle there in 1550. Marie-Christine, continuing the traditions of good taste imported from France to the Court of Savoy by Bonne de Bourbon and Bonne de Berry, took over the construction in 1633, and moved there with the Court in 1640.

The architect, the style of the present castle, the princess who had it built, everything was French. Only the director of the works, Antoine Bobba, and the majority of the workers, who came from the Lanzo valleys, were Piedmontese, as was Count Amédée de Castellamonte, who at the time was in charge of the works of the Royal Palace and who played an important part in the exterior decoration of the Valentino.

The large gate, through which we enter the courtyard of the Castle, dates back to 1860, when Le Valentin became the seat of the School of Application for engineers. Until then, the semicircular portico that connected the two outer pavilions could still be seen. The centre of the courtyard is occupied by the statue of Quintino Sella, who established the School of Application for Engineers.

The warm fantasy of the 17th century can already be seen on the exterior, in the cornice that ends the pavilions and in the windows of the first floor, which then develops fully and grandly in the large staircases and the rooms of the first floor. The doors and vaults of the flats are decorated with rich white and gold stucco decorations, frescoes with a gold background in Flemish style, by Carlo Solaro, Tommaso Carloni, Francesco and Pompeo Bianchi, Alessandro Casella and others. There is the Chamber of the Lily, the Audience Hall, the War Chamber, which receive their names from the paintings that adorn them.

As we walk through these rooms, where our bourgeois times have only known how to put school benches, the thought of the artist and the curious instinctively goes back to the times when the Castle joyfully resounded with the echoes of carrousels, jousts, tournaments and public festivals.

Then came more serious worries: the diplomatic talks for the truce between France and Spain, the evacuation of Turin by the French in 1645. Time laid its wrathful hand on the castle: the Jacobin fury damaged the paintings, tore up the tapestries and made the flats uninhabitable. Later still, in the last century, the Castle, once a place of delight, had to receive ignorant, drunken troops, who completed the vandal destruction begun by the French Revolution.

Nevertheless, in spite of so many insults that men have done to it, the Valentin, as it is now, still bears the stamp of its noble origin on its forehead. The delicate and aristocratic spirit of Marie-Christine still floats in it, and our era, which so finely searches for all the traces of the art of the past, can re-examine and execute this primitive and so grandiose design that the worries of the State and the troubled times prevented the Regent from bringing to a successful conclusion.

The insults of the centuries can be erased and, in a few years, when another more suitable location for the Polytechnic School has been found and the artistic collections currently scattered throughout the city have been placed in the Valentino Castle, Turin will be able to boast of having one of the most picturesque and suggestive Museums in Europe. When contemplating the sunset from the terrace overlooking the Po River, with the green hill and the dome of the Superga shining on the horizon, the visitor will have an impression that will make him think of the Palace of Versailles, of Notre-Dame, of the palaces of the Cité and of the banks of the Seine in the vicinity of Paris.