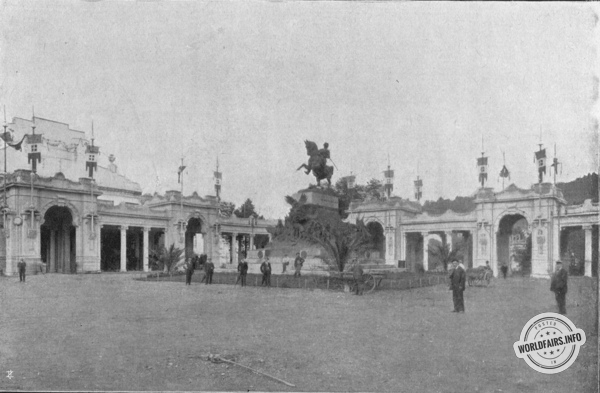 The site, at the intersection of the two main avenues, in the centre of the park and facing the hill, is so beautiful that it was chosen in 1900 to erect a monument to Prince Amedeo; it was initially thought to place this monument at the end of the Cours Vinzaglio, near the Place d'Armes. The beautiful equestrian statue, the work of David Calandra, with its lively groups, vibrant with modernity, is there, and adds to the charm of nature by the attraction of a ravishing work of art.

Those who drew up the plan for the Exhibition felt that this monument should be honoured; they drew attention to it by isolating it in the centre of a square of honour.

The colonnade which surrounds the square is not only intended to serve as a decoration; it also has a practical purpose, for it gives access, on the left, to the electricity gallery, and on the right, to the gallery of machines in action.

We will visit these sections later. Let's cross the square and, turning left into the park, let's begin to tour the central pavilions by visiting the Salle des Fêtes.