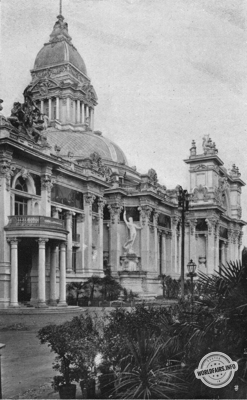 Together with the Palace of Artistic Industries, located near the main entrance and which we have already visited, the Festival Hall is the most remarkable architectural work of the Exhibition. Built on the plan of the Theatre of Olympia, with a 60-metre high dome, surrounded by galleries that increase its majesty, with a surface area of 10,000 square metres, it has all the solemnity of lines, all the richness of decoration that befits the main hall for industrial and labour festivals.

The interior of the building itself is remarkable for the richness of the stucco work and the imposing size of the hall. On the parterre, on the tiers, in the galleries, 3000 spectators can be seated comfortably. There is no standing room, so the religious contemplation of those who, from May to October, twice a week, will listen to the orchestra concerts, cannot be disturbed.

These concerts have a long and glorious tradition in Turin, dating back to May 1872, when Pedrotti inaugurated, with the support of the entire population, a series of popular concerts at the Victor Emmanuel Theatre.

During the Exhibition the symphonic concerts were performed by an orchestra of 146 musicians, under the direction of the first European masters. They were conducted in May by Mengelberg, German-Dutch, Serafin, Italian, Kayanus, Finnish; in June, by the Russian Sofonoff, by the French Debussy, author of Péléas et Mélisandre, and Pierné; in July, by Mancinelli, whose triumphs in Turin in 1884 at the head of the Bologna orchestra are still remembered; In September, by another great Italian master, Toscanini; in October, to end the season with dignity, the German Steinbach, an incomparable interpreter of Brahms and Schumann, the Frenchman D'Indy, the Englishman Ellgar and the German Mahler, a famous continuator of Beethoven's work, will take to the director's podium

The Exhibition Concerts were organised by the Society of Orchestral Concerts, which has existed in Turin since 1905, under the direction of its president, Commander Joseph Depanis.

The promenade of the Festivities Hall leads to the Musical Instruments Hall.


The decorations of the Festival Hall

All around the Festival Hall, a large decorative frieze, 2 metres high, runs under the cornice; it is immediately noticeable because of the golden patina with which it surrounds the hall.

The frieze is composed of two central paintings, placed above the entrance doors and separated by allegorical figures: fauns, mythological subjects, decorative figures, which support and stretch out a festoon of flowers and fruit, surrounding the building like a great festive garland.

The vivacity of the invention, the solid position of the figures which form an architectonic body with the lower colonnade, invite us to examine more closely this work, one of the most important among the decorative works of the Exhibition. One of the paintings in the centre represents the Triumph of Labour, symbolised by a country festival at harvest time, when Ceres, Pomona and Bacchus brighten up the earth with their gifts. Two square oxen, Virgil's beloved oxen with their gentle human gaze, are seen climbing the slope. Draped and garlanded, guided in triumph by a male allegorical figure, they occupy the centre of the painting, where figures waving flowers and fruits and tilting amphorae are moving and singing. Animated, in bacchic attitudes, these figures stand out clearly against the clear sky and form a lively scene.

The second painting represents the Triumph of the Flag, a flag of brilliant red, crowned with roses, around which all the peoples of the world crowd, bringing their fruits from the land and the sea to the celebration of universal brotherhood, represented by the Exhibition.

A third decorative painting, by the same artists as the exterior frieze, adorns the interior of the salon. Above the scene a canvas, 3 m. 50 high, 13 m. long, is placed. Above the stage a canvas, 3.5 m. high and 13 m. long, celebrates the Awakening of Music. Between the god Pan who invites the nymphs to dance to the sound of the flute and the Sirens who attract the fishermen with their songs, arrives on horseback the musical theory, a beautiful figure of woman, who, by stripping herself of her veils, comes to reconcile the primitive musics, by giving them a law and a rule. Two side panels show us a faun and a woman dancing, against a background of rosebushes. Then the leitmotif of the festoon of the outer frieze returns, but lighter, as befits the enclosed space, in tones that harmonise with the roses enveloping the Nymphs and the whole scene.

Even in this painting, the same warm colouring as in the outer frieze is immediately noticeable, the same golden transparency, through which the amalgam of colours passes and merges, leaving the impression of an ancient painting.

The young painters Rodolphe Premoli and Joseph Sohrile, the authors of the paintings, have shown by their work that they have understood what cheerful and brilliant ornamentation, intended to leave a luminous memory, is suitable for the Festive Salon of an Exhibition.

While remaining faithful to the 18th century, they have produced a highly original and personal work by the antique build of their figures; they have given indisputable proof of artistic seriousness by the care and patience with which they have executed the studies of their compositions from life, alternating them, blending them, and varying them infinitely.