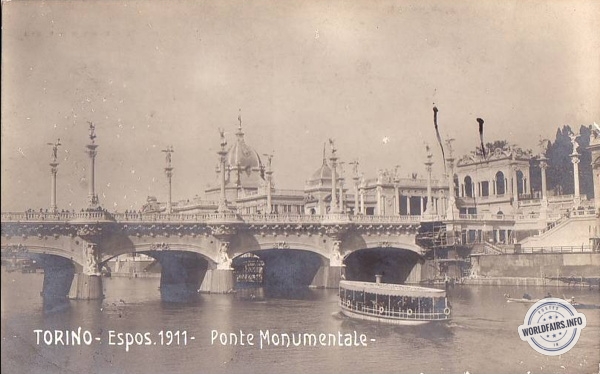 On leaving the Musical Instruments Gallery, the Monumental Bridge, located opposite, invites visitors to stop and admire its imposing lines.

A whole group of white statues is advancing towards us and makes us believe that the beautiful times of ancient Greece have returned. It is the winged choir of the Victories who, from the top of their columns, hold out laurel wreaths to the victors in the bright morning. At the base of the columns other statues, other nymphs, perhaps the Graces, hold hands and dance, as in the joyful chorus of the Muses and Apollo in the Guide.

The bridge is truly grand and majestic in its proportions. The trees on the left bank stretch out with us towards the other bank, as if to better admire the spectacle. The river seems to have shrunk from below; it seems as if the waters have been partly withdrawn to let the quadrigas of the victors pass.

The bridge goes towards the great monumental fountain, raised on the hill, in the grandiose style of the fountains of Bernini, in Rome. The fountain is framed by two bell towers which recall, in their decorative motifs, the beautiful St. John which Turin possesses, as well as Florence. In the large central niche of the fountain is the statue of the Fatherland, which appears to bless the spectacle of the fruitful work of the Exhibition at its feet.

The bridge that can be seen and admired from our vantage point in the centre of the park is only part of the bridge itself. It is the outer part only, for in its bowels it conceals an intense, feverish life that we cannot guess at first sight.

The two side staircases lead down to a large underground hall decorated with stucco, which forms three parallel passages. In the two side passages one walks "in lunga fila" to the other side, like the souls of Dante. In the central passage, on the other hand, we no longer witness a parade of shadows, but a creaking of iron; it is only the incessant movement of the conveyor belt that transports us in a moment to the other bank.

The bridge has five arches, each 21.30 metres long and 25 metres wide. The caryatids are the work of the sculptor J. B. Alloati; the pedestals of the columns, decorated with statues, are by the sculptor Bel Santo and the Victories by the sculptor Sassi.

The monumental bridge is the most convenient and picturesque passage to visit, coming from Valentino, the exhibitions of foreign nations lined up along the right bank of the Po. We continue, for the moment, the tour of the central pavilions, entering the Navy Gallery.