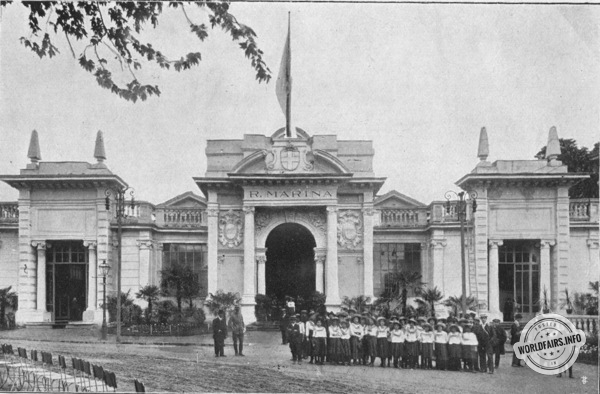 The Navy has never been missing from our exhibitions; the Navy exhibition not only has a special importance for technicians, but it also serves to spread among the people, among the masses, the cult of the sea, to make the models and names of our great warships familiar to the whole nation.

In the centre of the gallery, on a sea-coloured blue mirror, are arranged in a fine order all our ships, from the modest cruisers to the Giulio Cesare, the Dante Alighieri, the Leonardo da Vinci, the Conte di Cavour, the giants which tomorrow will descend to kiss the waves. It is an original and instructive idea, which gives at a glance the synthesis of our maritime forces. Further on, models built on a larger scale allow us to better study the organism.

Various elements were then reproduced from different ships: the infirmary of the "San Giorgio", the commander's quarters, the kitchen and the oven of the "Dante Alighieri".
To give an exact idea of the power of modern ships, seven steel cannons were displayed, no longer facsimiles, as in 1898, but authentic, one for each of the calibres used on our ships, from the smallest (37 mm) to the largest (305 mm).

Collections of photographs, models of basins, searchlights and explosion engines complete the exhibition. The exhibition of the Ministry of the Navy is made even more complete by the special exhibitions of various naval institutes: the Hydrographic Institute, the Naval Academy, the electroplating workshop, the Castellamare rope factory, the Muggiano range.

The naval pavilion covers an area of 4,000 square metres. It was built by adapting new galleries to the old building of the Palestre gymnastique founded in Valentin in 1844 under the auspices of Charles Albert, later transformed into the Skating-Ring; the technical office of the current Exhibition was placed there during the works.