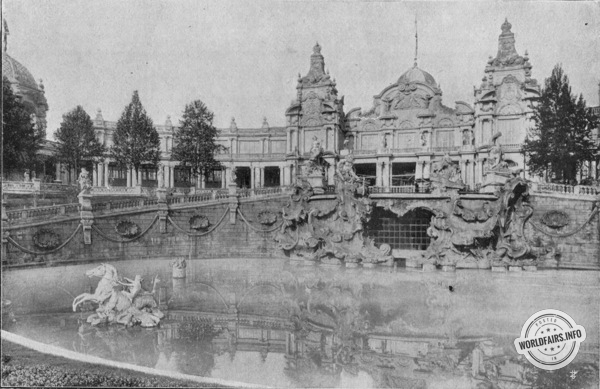 The English pavilion, reached by the gallery of machines in action or directly from the Park, is undoubtedly the most important special section of the Exhibition. It rises in an amphitheatre; from all sides there is a wonderful view of the Po and the hill through a thick clump of pine trees and the graceful attitudes of the statues in the monumental fountain of 1908.

The superbly isolated position of the pavilion instinctively brings to mind the theory of splendid isolation which has always directed England's policy to date. From here, as from her islands across the Channel, gazing at the group of other nations on the opposite shore, she seems to meditate on their strength, and to invite them to consider her own power.

The monumental fountain has traced for the English pavilion, with the movement of its architectural lines, a development of ample curve, whose beauty is admired at first sight. Around the central body of the building, flanked by two needles surmounted by the royal crown, run, on the right and left, porticoed balustrades with geminated columns, covered with terraces, decorated with statues and ending at both ends with two small temples crowned with domes. Further back, to complete the line of the building, rises the great dome of the hall of honour, 40 metres high.

In the interesting series of galleries, let us note now, in passing, this immense iron gallery where the English mechanical section is located; the adjoining manufactured goods gallery, displayed in elegant red wooden showcases; the naval gallery, decorated with a frieze of dolphins and tridents.

The importance of the development of English industry, universally recognised, is shown by a single eloquent figure: England exports 25 million francs worth of goods every day.

England exhibited not only in its own pavilion, but also in the international sections of electricity, machinery in action, and newspapers.

The very large participation of England in the 1911 Exhibition deserves to be illustrated by some historical data. After the two International Exhibitions in London in 1851 and 1862, and the successive Paris Exhibitions in 1878, 1889 and 1900, England had lost almost complete confidence in the practical usefulness of international exhibitions. Yet in October 1908 a Royal Commission, chaired by Sir Alfred Bateman, made a survey among English industrialists and established the desirability of competing in the future at the exhibitions of other nations. Only the competition, to guarantee success, had to be official, and equal to the importance of Great Britain and her trade.