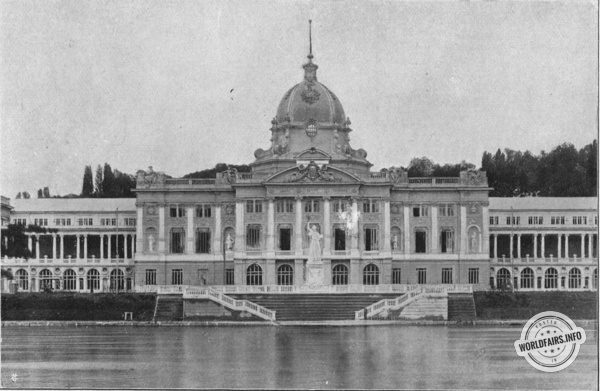 The palace that occupies the other symmetrical side of the large square on the right bank, opposite Germany, belongs to France. The eye can easily recognise it by looking at the French architectural motifs and details that have been happily grafted onto the 18th century Piedmontese.

The pavilion has a façade of 193 metres, with a lower floor, at the level of the bank of the Po, of 1130 square metres; the main floor has 10,860 square metres. The total area is 13,990 square metres. The central body includes a large hall, crowned by a 50-metre high dome; around this hall radiate the various galleries of which the section is composed.

We have already mentioned the exhibition of Italians abroad and the importance of trade between France and Italy, which in 1910 totalled over 500 million.

Let us therefore pass over the figures slightly. Let us only recall here the original retrospective exhibition of relations between France and Italy. Adjacent to the grand salon we have mentioned, this special exhibition has as its centrepiece an Empire-style salon d'honneur, octagonal in shape. In the niches in the corners are four statues of Napoleonic soldiers, plaster reproductions of those which adorn the triumphal arch of the Carrousel in Paris. All around, between the columns, are busts of Napoleon's most famous generals, and at the back stands the imperial throne of Fontainebleau. The gallery on the first floor is supported by 16 Ionic columns, to which correspond, supporting the vault, an equal number of caryatids. The salon was built by the architect Guilbert.

This retrospective exhibition, although limited to the last four centuries and to the relations of France with northern Italy, especially with the House of Savoy, is of the highest interest and will certainly be the most successful. It contains works by Italian artists who worked in France, portraits, medallions, busts, autographs of princes and princesses of the House of Savoy allied to France, Italian ambassadors at the French Court, and French personalities of Italian origin. Cardinal Mazarin rebuilt his salon for this occasion, which was kept in Paris in the Carnavalet Museum. To complete the retrospective exhibition, here are documents and prints relating to the war of 1859 and to Italian political refugees in France.

The palace, already monumental in itself, receives even more grace and majesty from the magnificent parterre that precedes it; this parterre is decorated with flowers, balustrades and statues.

Placed in the centre, it offers the best point of view to enjoy the panorama of the whole Valentin Park, from the Isabelle bridge to the Humbert bridge.