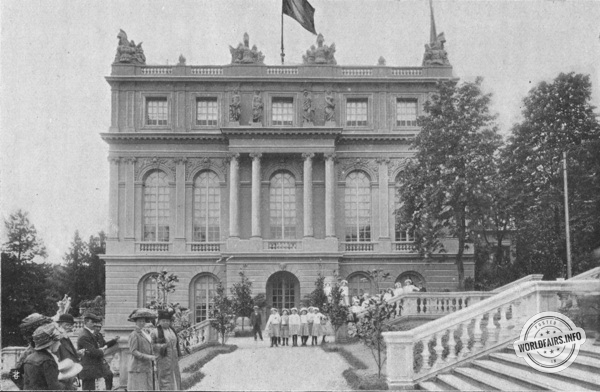 Leaving this favourite spot for visitors, let's go back over the monumental bridge for a moment to admire the pavilion of the City of Paris on the left.

The pavilion is not, like the main palace, chained to the general style of the Exhibition. It gives free rein to the rich elegance, the magnificent and sumptuous decoration of the French châteaux. Alongside the Valentin, it reproduces the Château de Versailles with a fidelity that commands the admiration of connoisseurs. Architectural lines, ornamental motifs, statues, irises, balcony and attic decorations, and even the colour of the exterior walls have been transported from the sumptuous palace of Versailles to the banks of the Po.

The pavilion has a terrace that juts out towards the river; it is decorated with groups of children and Louis XIV vases. Under the terrace, a fountain, decorated with a group of a Nymph and Love, makes the sound of its small waterfall heard in the middle of the garden that surrounds the building, covering with flowers the accesses to the monumental bridge and reproducing on the opposite side, towards the Valentin, the exedra of the Queen's Baths at Versailles.

The interior of the pavilion is no less rich and sumptuous than the exterior. Entering from the west, the first room offers us magnificent historical Gobelins. In the front row is the tapestry known as the Mordecai tapestry, executed by De Troy in 1740 in Rome. Four others, representing the god Terme, date back to the time of Louis XIV. The room, which is extremely rich, is completed by consoles, sofas and armchairs from the Beauvais factory, and by an exhibition of old Sèvres porcelain.

The second room can be called the modern tapestry room; it contains the delicate tapestries, of a beautiful design, by Chevet.

The large square reception room is decorated with modern gobelins, surrounded by coloured marble frames. On a tapestry are displayed the arms of Paris, with the ship under sail on the turbulent sea, the motto: Fluctuât nec mergitur and the insignia of the Legion of Honour. The Sèvres factory exhibits a statue of Gaul and a collection of modern porcelain.

The two rooms facing the Po contain a charming little museum, made up of collections from the famous Musée Carnavalet.

In the salon on the upper floor, flanked by two Louis XIV boudoirs, paintings, engravings and terracottas from a Beaux-Arts Retrospective Exhibition are displayed. The Pompadour style displays all its seductions with carved wooden panels decorated with festoons of flowers, taken from old demolished hotels in the Faubourg St. Germain. The white and gold ceiling brackets reproduce the original ceiling in the Château de Maison-Laffitte.

The precious art collections and historical reproductions have not made us forget the practical services: education, hygiene, public administration, streets, transport, lighting, public assistance have found a place in a series of rooms on the lower floor; nor have we forgotten the cinematographic reproduction, in a special room, of the most important palaces and events of the capital of France.

The Palace of France and the Pavilion of the City of Paris are the main, but not the only buildings constructed by Italy's sister nation and friend. Staying on the left bank of the Po, one can visit successively the pavilions of the City of Marseille, of Tunisia and of French Agriculture. The French Exhibition occupies a total area of 40,000 square metres.

The General Commissioner for France is Mr. Etienne Dervillé, President of the Compagnie Paris-Lyon-Méditerranée; the Deputy Commissioner is Mr. Eugène Pralon, Consul of France in Turin.

As for the exhibition of the city of Paris, in addition to Mr. Dervillé, we must also mention Mr. Bellan and Mr. Dausset, of the Paris City Council, as well as the architects Bouvard and Vincent.