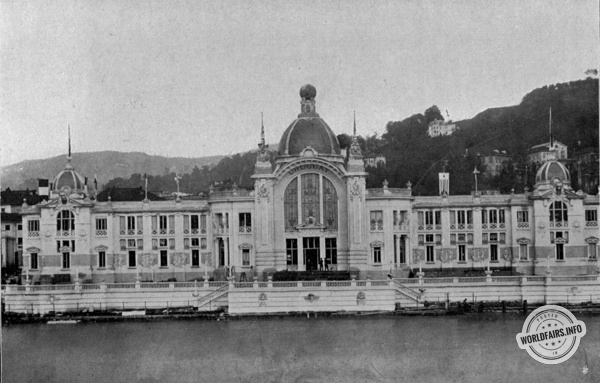 The Latin American pavilion includes Uruguay, Venezuela, Ecuador, Peru and Chile. This collective exhibition of States far removed from each other, united only by the love of exiled sons for their common mother, Italy, shows the power of cooperation and proves that great results can still be expected from our American colonies, if the ties that unite them to their original homeland become even stronger and closer.

The building occupies an area of 6,000 square metres and is the work of the architect Orsino Bonci. The style, very pure and sober, has a beautiful effect with its simple and severe lines. Large pilasters rise up to the attic and give the palace strength and grandeur. The tympanum of the central door, closed by stained glass, is decorated with groups of allegorical statues. The central dome has an original crown, formed by a map of the world.

The interior of the pavilion is divided into several rooms where all the countries have grouped their products. The Uruguayan exhibition occupies the central hall, two large rooms on the left and one on the right. Chile's exhibition is remarkable for the country's great mineral wealth in gold, silver, copper and saltpetre, and for the strong organisation of the Italian colony, which in Chile has established schools, hospitals and charities and holds the first rank among foreign colonies.