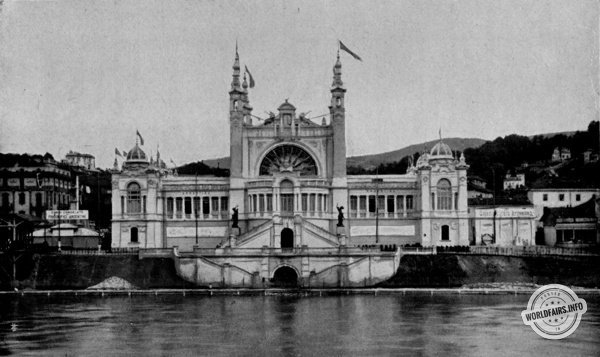 The Argentine Republic, with its extensive and fertile soil, which could easily accommodate 100 million inhabitants, deserved to take part, with its particular exhibition, in the International Exhibition of Industry and Labour.

The Argentinean pavilion shows a great variety of lines and a great attention to detail. A monumental staircase with two elliptical banisters leads up from the Po to the semi-elliptical entrance portal, which ends in a shell shape. The entrance hall is decorated with two rearing horses, ridden by two geniuses lighting the road to progress with their torches. The group, vigorously modelled, and adapted by its allegory to the youthful momentum of the nation, is the work of the sculptor Jacques Buzzi-Reschini.

Two high reliefs, 11 metres long and 2 metres high, adorn the base of the façade. One represents the Argentine countryside, the other the Port of Buenos Aires; both synthesise, through the life of the fields and the view of the port which supplies the whole nation with arms and manufactured goods, the two essential economic factors of Argentina.

The central body of the building, built on a square plan, launches four small pinnacled towers, topped by coloured balls, 35 metres high, into the sky. The large interior hall, with a wide vaulted ceiling and large historiated windows that reproduce the rising sun of the Argentinean coat of arms in a glory of colours, is 23 metres high.

The pavilion has a 60-metre façade, 25 sides and a total surface area of 4000 square metres. It was built to the design of the architect Rodolphe Levacher, who was partly responsible for the construction of the Prati di Castello barracks in Rome and whose beautiful project for the monumental Humbert I bridge over the Po is not forgotten in Turin.

Mr. Ferruccio Zileri, commercial attaché at the Argentinean Legation in Rome, has taken the lead in the work. The preparation of the exhibition has been entrusted to Mr. Gustave Niederlein, former General Commissioner of Argentina in Europe for the International Agricultural Exhibition in Buenos Aires in 1910. Deputy commissioners: the Argentinean Consul General in Genoa. Mr. Miguel Escalada, and the Argentinean Consul in Turin, Mr. Angelo Bottero. Secretary General: the engineer Carlos De Giroda.

If trade from 1865 to 1905 increased tenfold, with an ever-growing surplus of exports over imports, livestock breeding has no less eloquent figures to its credit: 29 million head of cattle, 7 million horses, 67 million sheep, which represent a total value of 19 billion, populate the Argentine pampas, and remind us of the distant vision of the endless countryside where the pastoralist peoples roamed.

The railways already have 27,500 km. in operation, in addition to 11,600 under construction. The telegraph lines have 59,125 km. and in 1910 transmitted about 12 million telegrams, in addition to 800 million of various correspondences. The capital, Buenos Ayres, is the largest commercial and industrial market in South America; it now has a population of 1,300,000, whereas only 40 years ago, in 1869, it had only 177,000 inhabitants.

These figures, more eloquent than any commentary, are for Italy a just cause for complacency and pride. For Italy has sent a million of her sons to Argentina. The 20 million hectares cleared in the last 40 years are for the most part the work of their arms. In every corner of the Argentine pampas, from the Great Chaco to Patagonia, from Buenos Aires and Rosario to the Andes, Italians from every province live and work, supporting the greatness of Argentina. The foreign pavilions on the right bank of the Po could have no more worthy crowning glory than the exhibition of the State which has given hospitality to our greatest overseas colony.