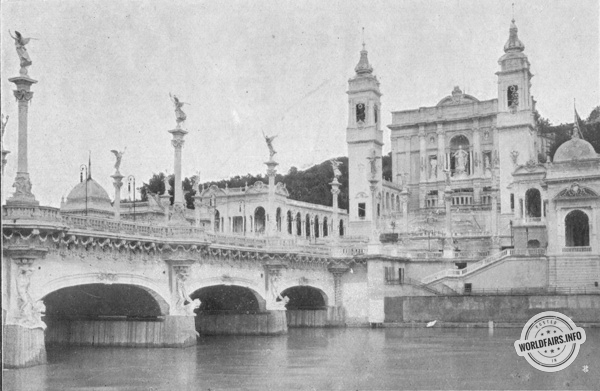 The review of the buildings of the Exhibition is over. All that remains is to say goodbye to them, embracing them all in a general view from the top of the Water Tower.

Let us pass the monumental bridge one last time, between the glory of its victories, in the serene, tranquil light of the morning or in the warmer, more fiery light of sunset.

Let's go up the grandiose staircase, with its 300 monumental steps, between the two slender bell towers; here is the enormous sheet of water that rushes down the cool slope, with a silvery murmur, imposing for its 40-metre width, like the great waterfall of the Toce a la Frua, in our Alps of Ossola.

Our view is brightened up on the hill by allegorical statues. Temperance, Constancy, Justice and Wisdom on the pediment teach us the main virtues, those which are the foundations of existence, those which show us the sure road to reach, in the struggle for life, the glorious and certain goal. The colossal Patria which occupies the great niche in the middle, at the highest peak of the Exhibition which it crowns, reminds us of an incontestable truth: it is by grouping together in the shadow of the sacred flag, the flag of the land which saw them born, which gave them a common origin, a common language and common aspirations, that peoples can prosper and rise to true greatness.